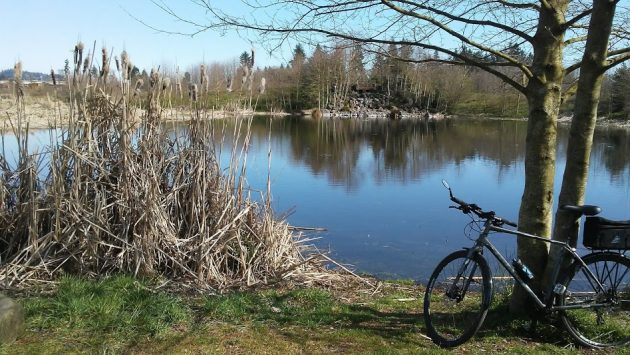 Talking Water Gardens on March 17. The waterfall in the distance was dry.

Albany’s Talking Water Gardens remain open to the public during the corona crisis, but visitors may find the waters silent, and lower than they used to be. What’s going on?

The waterfalls are not flowing, for one thing. And some of the ponds look more like they are merely moist.

You may recall that last July, the Oregon Department of Environmental Quality fined the city of Albany $5,400, charging that underground leaks from the constructed wetlands into First Lake amounted to an unauthorized discharge of treated wastewater. The DEQ gave the city 90 days to develop a plan to stop the leaks.

Previously, the city had sued the engineering firm that designed the wetlands and oversaw its construction, which was completed in 2012 at a cost of about $14 million.

A couple of  weeks  ago I inquired about the conditions at Talking Waters and was referred to a couple of Portland law firms handling the litigation for Albany. I contacted one of them, Kerry Shepherd of Markowitz Herbold PC, and he replied:

“I have your inquiry about the Talking Water Gardens wetlands. The water in the gardens has been drawn down for maintenance and planting work as well as to address DEQ regulatory concerns associated with unpermitted leaking of treated effluent from the wetlands to adjacent waterways. While drawn down, the city will be studying the soils and site conditions and some flow will return, as needed, to maintain the health of the wetland.”

What happened to the DEQ’s 90-day deadline for Albany to come up with a plan? I touched base with Harry Esteve, the DEQ’s spokesman in Portland. He said the city had appealed, the matter was in litigation, and there was nothing more that he could say.

While we’re crashing the economy because of the corona panic and the media are forecasting unemployment of 20 percent, does anyone care about what happens with those artificial wetlands? Probably not. But low water or not, if you want to go for a walk to take your mind off the virus, the Talking Gardens are still a nice place to go. (hh)