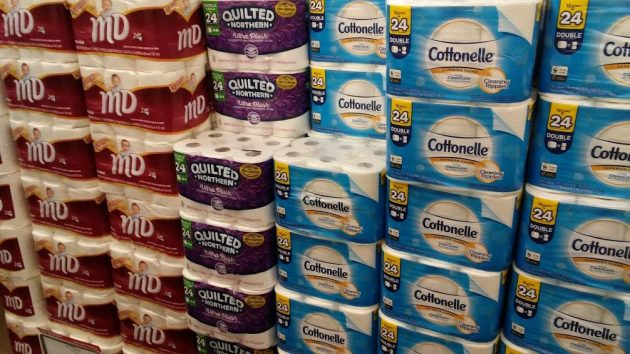 It looked like good news: The normal supply of a necessity at Albany’s Bi-Mart on Tuesday.

Most stores ran out of toilet paper early in the coronavirus panic. So may we be allowed to see a glimmer of hope for an early return to normalcy now that this particular shortage seems to have been overcome?

Not according to Governor Kate Brown, who on Tuesday declined to project a date by which current restrictions on business and people’s movement will be lifted or relaxed.

And not according to the Institute for Disease Modeling in Bellevue, Wash., which concluded in its latest Oregon update on April 10 that “current interventions will need to be maintained in order to decrease the number of active infections.”

Governor Brown says a bunch of things have to happen for her to lift her stay-home mandate and business closures. These are a declining growth rate of active cases, enough protective equipment for medical workers, enough hospital capacity to handle a potential surge in patients, a greater capacity to test people, more tracing and isolating of people with positive tests, and plans to protect nursing homes and homeless people.

That’s a mountain of conditions that may or may not be achieved soon, if ever.

As the destruction of the Oregon economy deepens, maybe the governor will see that what she called her “framework” of conditions for lifting restrictions should be amended. A series of little steps would be worth trying, starting now, before people get more sick of the restrictions than they are fearful of the virus.

In the meantime, whatever the reasons, let’s be grateful that at least the shortage of bathroom tissue seems to have resolved itself. (hh)


8 responses to “Corona Days: A little sign of hope?”