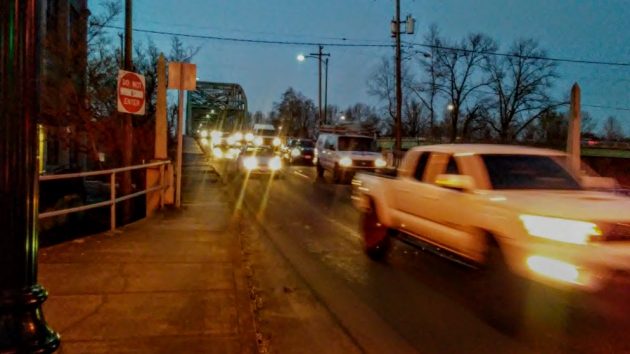 Vehicles come off the Ellsworth Street Bridge just before 6 p.m. Monday, when traffic was flowing freely.

Don’t expect quick action on ways to ease traffic congestion on Highway 20 in North Albany and downtown. And as for a third Albany bridge across the Willamette? Not likely, certainly not in the lifetime of anyone reading this blog.

That pretty much sums up the situation after Monday’s work session of the city council..

With two members absent, the council took no action on a proposal by Ron Irish, the city’s transportation systems analyst, to start looking for a consultant to study ways to reduce peak-hour congestion on Highway 20 from North Albany Road to Pacific Boulevard. The issue may come up again at the regular council session Wednesday.

ODOT may some day do a capacity study of the entire Highway 20 corridor from Corvallis to I-5, but this won’t happen for at least another four years, and maybe not then. In the meantime, Irish is proposing that Albany take the lead on a study of just the North Albany and downtown segments, and ODOT would help with that. But ODOT can’t spare anybody to help for a year, even if the council says yes now.

Irish has suggested six potential measures to improve traffic flow during peak hours, when vehicles trying to enter Albany sometimes back up to Hyak Park. Possible measures include modernizing the traffic signals from North Albany Road to Third Avenue and adding turn lanes in various places. It takes a computer simulation to learn how each of these, separately or in different combinations, would affect the traffic flow. That’s why a study is needed, Irish says.

Mayor Sharon Konopa worries that creating more turn lanes would take away what parking is left on the downtown couplet. And when that proves not enough, would buildings have to go next? “We need another bridge,” she says, “but I won’t see it in my lifetime.”

Nor, in all likelihood, will anyone else. Building another bridge, and the new highways and approaches it would need, would be incredibly controversial and expensive. And then, depending on commuting patterns at the time, it might not solve the problem.

If the council eventually approves calling for the study Irish proposes, it will be a year and a half before it reaches any conclusions about signal changes or the other possible measures. Then it will be a year or so before any are carried out, if indeed any of them are.

What can commuters do in the meantime? Not much, except to change the their routines, if possible, take different routes, or alter the times they set out on the road. (hh)