Coming back to Sunrise Park: Here’s why

Sunrise Park’s renovation remains a work in progress. It looked like this on Thursday.

Albany’s Sunrise Park is interesting for at least two reasons. First, it’s being renovated specifically to help the surrounding neighborhood, one of Albany’s poorest. And second, the process of getting it done illustrates the insanity of state and federal rules on “wetlands.”

The renovation is nearing completion, but it’s taking a bit longer than expected. In March the city awarded a $259,500 contract for the construction work involved. That job appears essentially done, and parks maintenance has been installing the playground equipment. The parks department expects delivery of a shelter in August. Landscaping and irrigation won’t be finished till the end of summer, when cooler weather should help new plants survive.

“However,” Parks and Recreation Director Ed Hodney told me when I asked, “we will open the new playground and the rest of the park to public use with a ‘sneak peek’ during a National Night Out event on Aug. 7.” Then, he says, a formal dedication will be held after school starts in the fall.

Albany is spending about $239,000 in federal antipoverty grant money toward the park renovation, for which planning started in 2013. What got my attention early on was that roughly half of the 3.16 acres of this city park was found to qualify as “wetlands.”

This caused delays while the city had to obtain a “wetland removal and fill permit.” And the city had to spend $38,000 out of the project budget to buy mitigation credits in a Eugene “wetlands bank.” This for a fully developed city park that had no connection with fisheries, navigation, water sports or the environment — the things that protection of real wetlands is supposed to enhance.

By the time kids play on the new playground, and families gather under the new shelter after parking in the new 15-space lot, the benefits of this improved park to the Sunrise neighborhood should be obvious. And maybe nobody will remember that our wetlands rules forced the city to waste an albeit small portion of this project’s expense. (hh) 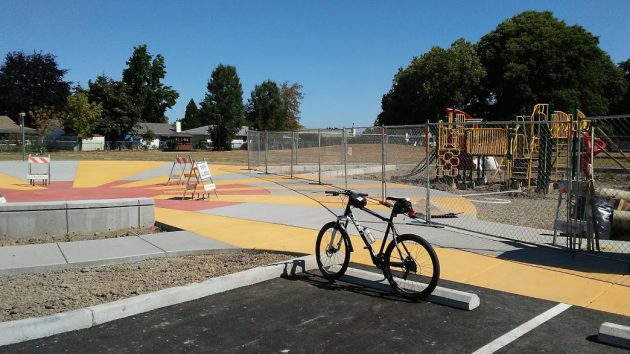 A shelter will be installed over the orange concrete toward the left side of this frame.


9 responses to “Coming back to Sunrise Park: Here’s why”