Coffin Butte: The price and other concerns 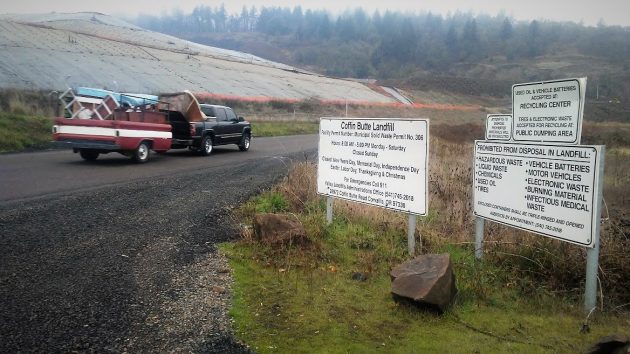 A customer is about to enter Coffin Butte Saturday to dump a load of junk.

Republic Services wants to sharply increase the minimum fee for taking stuff to the Coffin Butte landfill, but the price of dumping is not the only issue that should concern the public.

A notice of the higher dumping fee starting Jan. 1 has been reproduced on Facebook. And from a meeting of the Benton County commissioners on Dec. 4, Bennett Hall reported in the Gazette-Times that the minimum would rise from $28.75 for up to 500 pounds to $85.75 for up to 2,000 pounds.

But Julie Jackson, the municipal manager for Republic Services, told me Friday the new rate was not yet set in stone and any notice of the amount may have been premature. If I understood her right, the company was reconsidering what it would charge at the landfill after the end of the year. (On its website, Coffin Butte by Saturday had eliminated all references to its prices and invited customers to call for pricing information. Its recorded message, though, still had details on fees.)

Jackson did say Republic wanted to raise the minimum to discourage people from taking things to be dumped. The company is concerned about increased traffic at Coffin Butte and says it offers other services, for a fee, such as Dumpsters or picking up things that are too big to fit in the household trash bins.

In the background of all this, there’s the question of how long Coffin Butte can be used before it is full. At the end of 2016, Republic said that at the current disposal rate of about 500,000 tons per year, the landfill would have between 36 and 41 years of life left. (It depends on how much the refuse can be compacted.) What will our successors in this valley do when there’s no place to dump trash at any price?

The landfill is filling up with material from not just local jurisdictions. By tonnage, the county leading in Coffin Butte disposals in 2016 was Marion. It was followed, more or less in order, by Linn, Washington, Benton, Polk, Tillamook, Lincoln, Columbia, Lane, and Clackamas.

If too much traffic is a concern, residents within 30 minutes of Coffin Butte might wonder why they should pay exorbitant tipping fees so that trash haulers from up to 100 miles away don’t have to wait at the scales. In fact, our state policy makers and local politicians, including the Benton officials approving the next Coffin Butte franchise, should explain how it makes sense to haul waste over long distances. Why, for example, can’t Washington County dispose of its trash there? (hh) 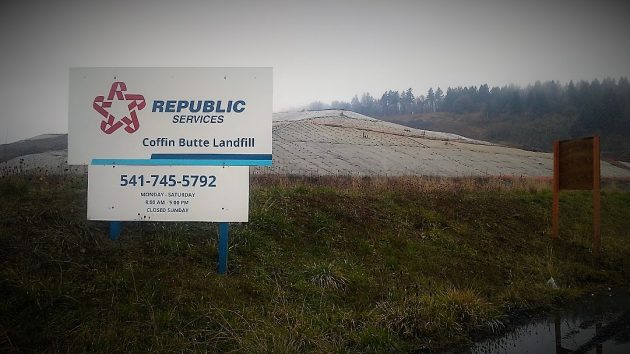 The Coffin Butte landfill has risen to a quite considerable height.


27 responses to “Coffin Butte: The price and other concerns”