That little blue trash truck halfway up the hill gives you an idea of the size of the Coffin Butte landfill.

We throw away too much stuff.  That’s because we buy way too much stuff we can’t or won’t reuse. And that is pretty much the story of the Coffin Butte Landfill, which now hopes to win Benton County’s approval for an expansion that would result in a tower of trash even higher than what we see now.

Until the county’s solid waste advisory committee endorsed the expansion Tuesday night and the local paper published a story, the expansion got little public attention. A reader who lives in northern Benton County called my attention to it over the weekend. The county planning commission will hold a virtual online public hearing at 7 on Tuesday, Nov. 2.

Valley Landfills, which owns the property, and Republic Services, which operates it, are asking for a conditional use permit to expand the landfill to the south, which would close and cover Coffin Butte Road west of Highway 99W. Their plans show that the new pile of compacted refuse on that side would eventually be taller than the mountain you see north of the road, which itself is planned to grow some more.

A new service road would be built on the south side of the expansion area, but it would not be public.

People living on the outskirts of North Albany, in the Palestine area, can see the landfill across the valley to the west. And now and then, on damp mornings when fog hangs in the air, they can smell it. Presumably that’s the gas that escapes the elaborate system the landfill has for catching methane and burning it for electricity, enough to power 4,000 houses.

The operators say the landfill will fill up the available air space in the current “cell” in about four years. Then it has about 15 years in a cell planned for the quarry on the side of the butte. But they say four years is not enough time to build the quarry cell, and besides, they would like to keep mining the aggregate, which is used on mid-valley building sites, until it’s gone. Hence the proposal for the new cell, which would be filled up in 12 years.

All together, with the proposed expansion now and then the quarry site later, the landfill could continue to accept waste for 30 years.

It could be longer if the waste came only from Benton, Linn and Polk counties. But last year, for example, of the 863,209 tons of refuse dumped at Coffin Butte, according to its annual report, less than 300,000 tons came from the three local counties. The largest amount  from any county, more than 180,000 tons, came from Marion County. Smaller amounts came from Tillamook, Yamhill, Lincoln, Washington, Clackamas and even Columbia County.

Tiny amounts of specialty waste, such as asbestos, were trucked down here from Clark and Cowlitz counties in Washington.

The  real problem, though, is that there’s too much trash, regardless of where it comes from. Even if the expansion is approved, what happens when Coffin Butte is full? We have less than a generation to figure that out. Thirty years can go by in a flash. (hh) 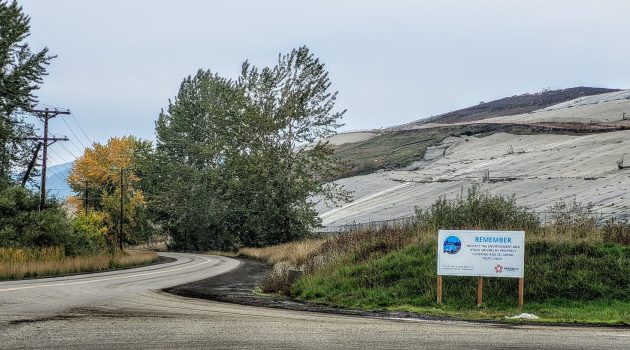 Coffin Buttte Road, on the left, would be closed anc covered by trash. 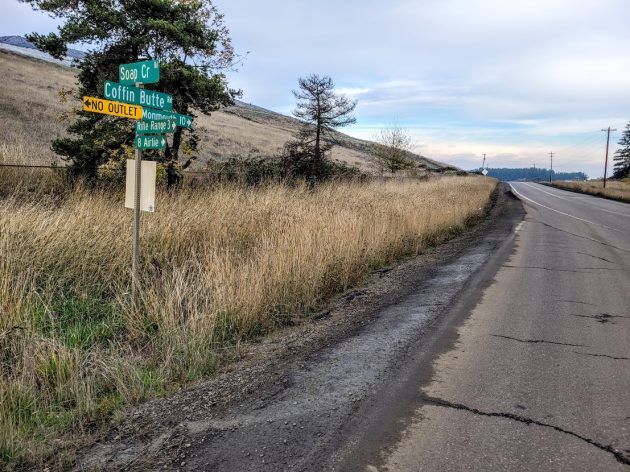 Soap Creek Road would end at this intersection with Coffin Butte Road, on the right. The dump is on the left.