Closing a lane gets push-back 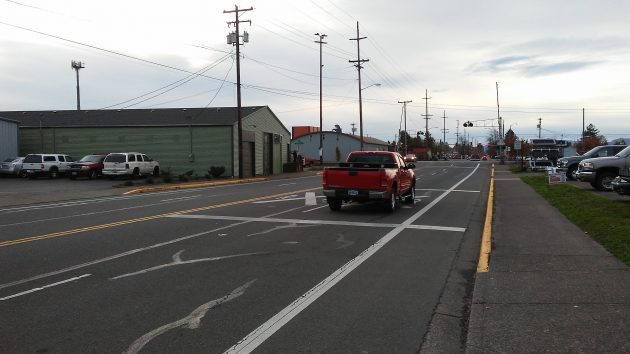 The red pickup is using the lane of Queen Avenue that would disappear under an ODOT plan to revamp the Queen Avenue crossing, in the background.

Because it calls for losing a lane on Queen Avenue westbound, Albany City Council members Rich Kellum and Bill Coburn are pushing back against a proposal by ODOT-Rail to add more gates at the Queen Avenue railroad crossing.

As a result, the plan got no closer to council approval on Monday. Instead, the council encouraged city officials to ask business owners and employees in dozens of companies along Ferry Avenue S.W. to see what they thought of the idea. Kellum said he had worked on Ferry for several years and made thousands of left turns from there onto Queen, at the intersection where the second lane now starts. He said getting rid of the lane would make left turns that much harder for some 500 people who work along Ferry or nearby.

Janet Steele of the chamber of commerce told the council that business — especially Oregon Freeze Dry — was concerned about the effect the street project might have on employees and customers.

What ODOT-Rail wants to do is close the right westbound lane for one block from Ferry to the crossing to make room for sidewalk improvements on the north side of Queen. The plan calls for pedestrian gates to keep walkers and people on bikes from going around the street gates while they’re still down. Sometimes they are still down after a locomotive shunting rail cars has cleared the crossing because a through train — invisible from the east and hard to hear because of the crossing bells — is coming along on the mainline. Two men on bicycles have been killed in recent years because they went around the closed gates.

Kellum wants the sidewalk upgrades to be done on the south side of the street and ask pedestrians to cross the tracks only there. There is no proper sidewalk on the north side anyway, and installing one outside the existing travel lanes is impossible because of the location of a Union Pacific switch. Coburn wants to know where there’s a pedestrian crossing like the one that’s planned. He’d like to go check how it works.

Mayor Sharon Konopa, City Manager Wes Hare and Councilor Floyd Collins favor the project. Hare said the benefits, including safety and work by the UP to smooth the crossing pavement, outweigh the inconvenience of making left turns from Ferry, an already troublesome intersection. Another benefit: ODOT would pay for the project.

The council is not done with this. Expect the subject to return to a work session agenda in the coming weeks. (hh)

3 responses to “Closing a lane gets push-back”