Close to town, a nice place for boats 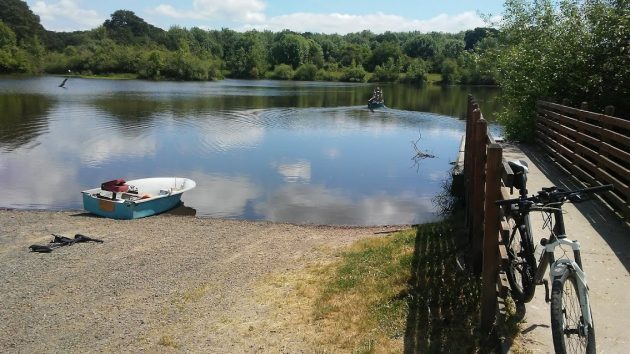 One of the many side benefits of the interstate highway system: Albany’s Freeway Lakes.

The bike took me past Freeway Lakes southeast of Albany the other day. Once again I was glad to see that this place is getting some use by people in small boats.

As the name implies, this site on the Linn County Parks System had its origin in the creation of the interstate highway system. The state bought the acreage in 1957 to excavate rock and fill for the construction of Interstate 5. Oak Creek filled he resulting holes in the ground with water, and in 1965 the property was given to Linn County for recreation.  The park facilities, sparse as they may be, were completed in 1969.

There are three ponds totaling 37 acres, connected by channels underneath Three Lakes Road and the freeway itself. The biggest is west of the freeway. At 21 acres, it’s wide enough for messing about in a small sailboat. If you don’t want to trouble yourself with having to lower the mast under the bridges, take a canoe.

I checked with Brian Carroll, the Linn County parks director, and he told me the county has no immediate plans for changes at Freeway Lakes other than grading the parking lot.

“The parks staff and I have talked about the need to do a new master plan for Freeway, however we have not pursued that yet,” he wrote in an email. “We have very limited land that we own around the lake which, currently, limits how much we can do with it. The fishing is still popular and I have seen increased kayak use on the lakes so I believe the park and lakes still have value to the community. I think in the near future the park will need to see some renovation and planning to meet community needs as Albany grows.”

Twenty or 30 years ago, I remember talking to someone who predicted the lakes would become choked with weeds because of eutrophication, an accumulation of nutrients due to runoff. But so far, that evidently has not come about, at least not to the extent of preventing the use of small boats. (hh)


5 responses to “Close to town, a nice place for boats”