Close to nature: A city of wooded trails 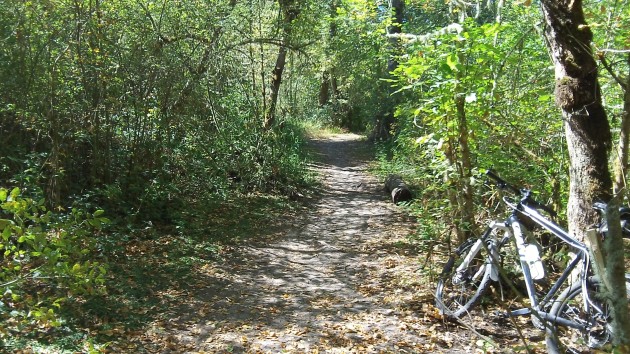 For a town that is basically flat, Albany has a surprisingly many miles of trails suitable for negotiating on a mountain bike.  This is one of them. 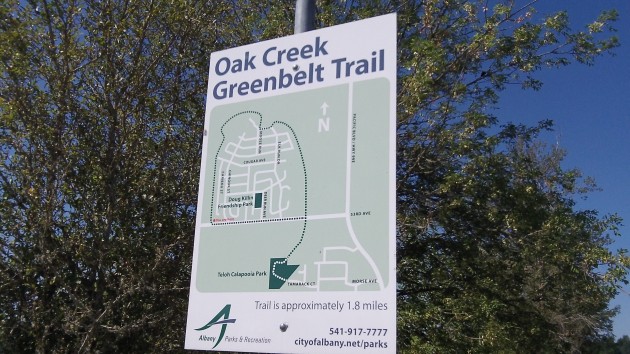 It’s the Oak Creek Greenbelt Trail in the southwest corner of the city, skirting the subdivisions off 53rd Avenue S.W. As you can see, it takes the visitor through the wooded bottomlands along the creek for which it is named. There are a few obstacles, such as a ford that is inundated even at the end of a dry summer. But it’s easy to ride, with a few interesting ups and downs. To get there, you follow 53rd to near its western end and watch for the sign shown here.

This is not the only Albany trail of its kind. Just as wooded and seemingly miles from nowhere — even though just minutes away — are the Simpson Park and Takena trails on opposite sides of the Willamette River, each extending about a mile and a half or more downriver before ending in a handy turn-around loop.

On all these trails, you’ll encounter occasional walkers with their dogs, but for the most part you will have them to yourself. If you want to walk or ride them, though, you might want to do so now before the wet weather sets in. Once we’ve had a couple of months of rain, parts of the Oak Creek trail are under water, and the others get kind of mushy where they haven’t been covered with layers of wood chips. (hh)

The spelling of Takena (it has no h) has been fixed in this version.


5 responses to “Close to nature: A city of wooded trails”