Close call at a blind corner 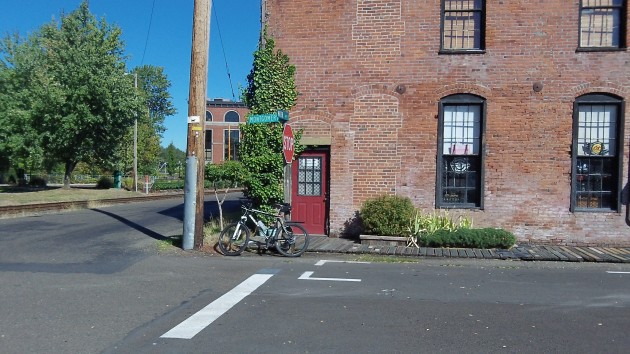 Montgomery and Water, where it’s hard to see approaching cars.

If you’re looking for a respite from bad news about politics and everything else that’s going wrong, you have come to the right place. This is the home of the mundane. Like blind corners on one of my bike routes along the Albany riverfront.

This particular trouble spot is at the corner of Montgomery Street and Water Avenue. An antique brick building sits at the corner, and Water Avenue is narrow, constrained by the notorious railroad track on the other side. If you’re riding north on Montgomery, you can’t see cars coming west on Water even if you come to a complete stop at the white line.

To make a left turn, I could get off the bike, walk two or three steps to the corner and peek around the building. But who does that?

So instead I’m slowing way, WAY down, see nothing, edge forward some more, and there’s a pickup heading my way. If I hit the brakes now, I’m going to crash. The only feasible choice is to stomp on the pedals and scoot across Water and get to the other side ahead of the oncoming rig…. Phew! That was a little close.

And there goes another driver thinking ill of cyclists refusing to obey traffic signs. Maybe not in this case, though. As he goes by, I see he has a couple of bikes hanging on racks in back of his truck. So maybe he understands.

This is not the only place in town where an adequate view of cross traffic is blocked by buildings, bushes, or trucks or buses parked too close to the corner. At some of the others, some pruning or additional no-parking paint on the curb might help. At Water and Montgomery, it’s best to avoid the place because that building can’t be moved. (hh) 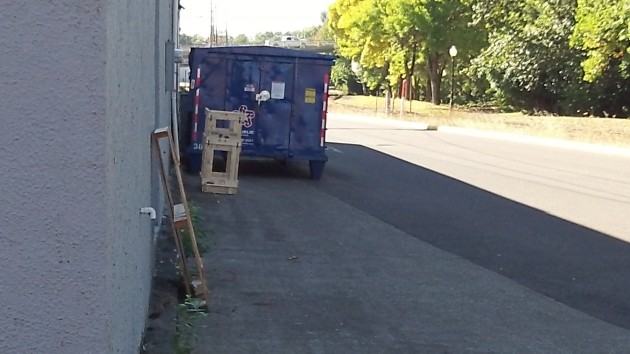 In the other direction, visibility is almost as bad.