As I was saying above, I make so bold as to note that once again, looking for a sign of climate change at the Oregon coast, I can’t find any. That’s not to say there aren’t any. But in terms of sea level, if there’s been a change over the last 20 years or so, it’s too subtle to be felt or seen.

And if change is too subtle to be seen, maybe we ought not to use it as the reason for forcing fundamental changes affecting our economy, that is, how people are able to make a living and arrange their lives. So it makes sense to me that the new federal administration is backing off regulations or policies the previous administration pronounced with the aim of slowing climate change around the world.

I did notice one thing this weekend: No living barnacles on the rocks in the estuary of the Yachats River. The rocks are covered with the traces of where barnacles used to be glued to the stone. But even under water, the few remaining barnacle shells crumbled when I poked them.

The explanation might be as simple as this: Last year’s batch of barnacles was covered by sand too long and did not live through the winter. So maybe this is a seasonal thing. If anybody can enlighten me about the life cycle of those crusty little fellows, I’d appreciate a note in the comments below. (hh) 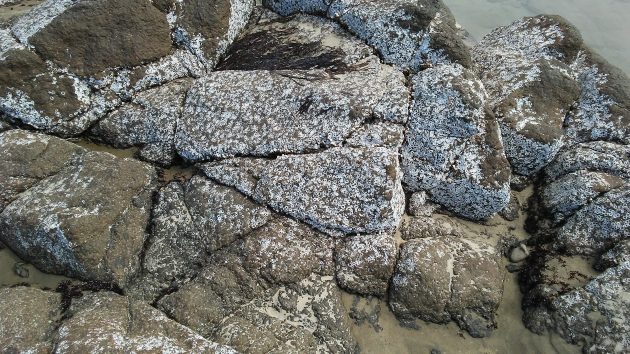 The remains of barnacles on the rocks rising from the sand in the Yachats River bay.