Climate plan: What else is new? 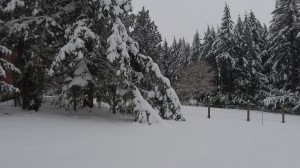 How about “planning” for more snow, in case the models are wrong in predicting less?

Portland and Multnomah County have drafted a 30-page plan to deal with “climate change.” You’ll be happy to know that it doesn’t propose anything that isn’t already being done or that prudent communities in Oregon would not do based on the climate we have.
You’ll be happy to know this because once the metro area has its plan, chances are that downstate towns will be tempted to draw up climate plans of their own, and there’s a reasonable fear that heroic counter measures might cost more money. Never fear, however. No heroic measures are called for, and those actions that are mentioned in the Portland plan are being taken already, and they need not cost anything extra.

The Portland plan is based on the premise that over time — the next century or so — summers might get warmer and drier, with occasional severe heat waves, and that winters in Oregon might get milder and wetter. Readings over the last several years suggest a trend in the opposite direction, but the Portland planners don’t count on that continuing. Of course there would still be the occasional blizzard and ice storm, but this plan isn’t about something that actually happens. It’s about what some models predict.

So the plan envisions measures to deal with more summer heat and more winter water. It suggests, among many other things, augmenting the city water supply and being ready to respond to heat waves that hit the poor especially hard.

It says streets should be built to deal with more winter rain. Some new streets in Oregon already are built with swales to absorb runoff, and the Portland plan mentions porous pavement, a good idea.

More winter rain would mean more landslides, and hilly areas all over Oregon already deal with those. Prudent people don’t  build on slide-prone slopes, and prudent codes don’t allow it.

The Portland plan would encourage more urban trees and “ecoroofs,” with plantings on them, in order to lessen the heat island effect common to big concentrations of buildings and pavement. Not bad ideas — already being carried out here and there.

And of course, the plan calls for — what else? — more research on dealing with extreme weather and changes in the climate. That’s what keeps the climate activists employed.

There’s nothing new in this plan and nothing that is not already being carried out, at least to some degree and not just in Portland. And climate change? In this case it’s mainly an excuse for people to be paid to write another plan. (hh)


One response to “Climate plan: What else is new?”