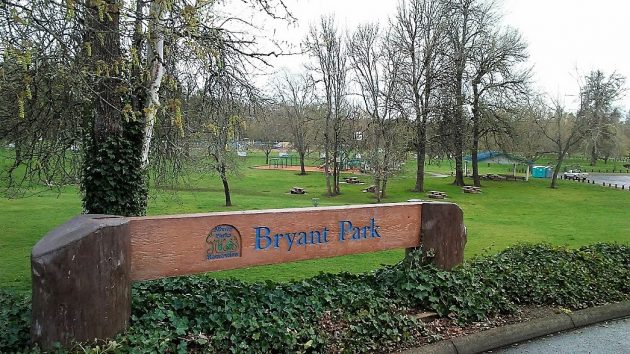 Bryant Park on a rainy day in April: Not an inviting place to camp.

So has anyone been charged with illegal camping since the Albany City Council passed its camping ban on public property on March 28? And what would be the penalty in a case like that?

The camping ban applies to any public property, including sidewalks and the space under bridges including the Pacific Boulevard viaduct, which has been a spot where homeless people often spent the night. The ban also covers parks, but overnight camping in city parks has been unlawful before, for decades in fact.

I wondered if anyone had run afoul of the new law. The police department told me Thursday there had been only two citations since the new ordinance took effect. A man and a woman were cited on April 7 for camping in Bryant Park. Two weeks before this, they had been found camped in the park and warned, according to the police.

Marilyn Smith in the city manager’s office told me these two were cited under long-standing city regulations against overnight camping in parks rather than the new ordinance.

Either way, what’s the potential penalty? These two citations list a possible fine of $2,500, which along with a year in jail is the maximum fine for a misdemeanor. That’s a highly unlikely penalty in a case like this. The Albany Municipal Code gives the city prosecutor the option, depending on circumstances, of treating any misdemeanor as a violation, an offense for which the maximum penalty is a civil fine of $1,000.

Jessica Henson, the assistant city attorney who prosecutes cases in city court, has not seen these citations yet. Typically she doesn’t get involved unless defendants are represented by lawyers. Cases like this often get resolved at the first appearance, the arraignment, if people plead guilty or explain their circumstances to the judge.

Henson told me she considers the circumstances. So, for example, if someone is caught camping in a park because of hard luck but is working to procure housing, she’s likely to drop the complaint. “I care about them,” she said of people appearing in municipal court.

The council didn’t talk about penalties when it passed the public-property-camping ban last month. If they had, they might have considered how likely it would be that homeless people sleeping under bridges — or in parks — would be be able to pay even a nominal fine. (hh) 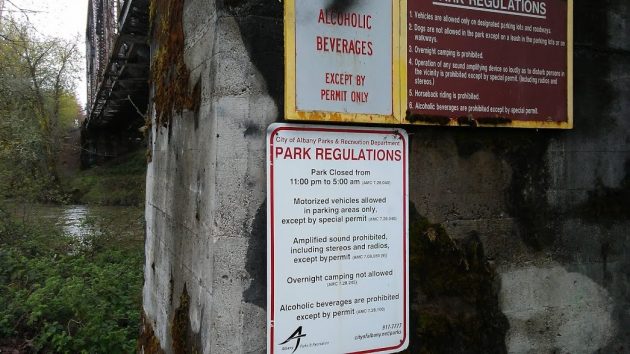 The anti-camping rules are so old they are stated twice: “Not allowed” and “prohibited.”