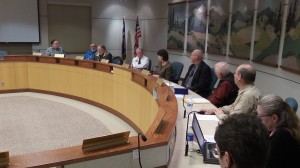 The city council in session: Would they want to prohibit medical marijuana?

It sounds as though the city of Albany wants to outlaw not just dispensaries when they become legal next spring but medical marijuana itself. At the behest of four members of the city council, the planning commission on Jan. 27 will consider an amendment to the Albany Development Code, the city’s land use law.
“No parcel of land or structure,” the amendment reads, “may be used for, or in conjunction with, an activity that violates any state or federal law prohibiting the manufacture, distribution, dispensation, or possession of any controlled substance as that term is defined (in federal law).”

The language is intended to prohibit the opening of any medical marijuana dispensary, which is what the council majority apparently wants even though the legislature has authorized such businesses under very restrictive conditions. But the wording also appears to ban the mere possession — and thus the use — of medical marijuana at home by anybody living anywhere in Albany. Marijuana, after all, medical or otherwise, remains unlawful under federal law.

It’s not likely to happen, but if this language is adopted, the city theoretically could come after any resident or visitor who grows or uses medical marijuana as authorized by state law. So, if a marijuana patient gets crosswise with a neighbor, the neighbor could denounce him with the city’s planning department for violating the development code. I doubt that even the council’s most ardent opponents of medical weed want to go that far. (hh)

(Tune in as I talk about this and other issues with host Jeff McMahon on KGAL’s “Valley Talk” program from 11 a.m. to noon on Tuesday.)