City: What the “against” voters want 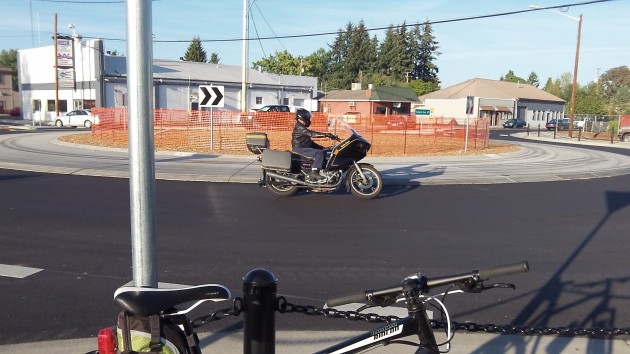 How necessary is it, really, to add decorations to this traffic circle?

Even though the four incumbents on the Albany City Council got re-elected Tuesday, it would be a mistake for them to shrug off the very substantial number of votes that three of them did not get.

One of them, Councilwoman Bessie Johnson, had no opposition. The others, while winning, did not exactly generate landslide margins of victory. Mayor Sharon Konopa earned the support of about 8,800 voters even though she put up no active campaign, but she also had to recognize that about 7,300 city residents voted against her by going for the two other names on the ballot. (Based on updated returns, these rounded-off totals have been corrected from an earlier version of this story.)

Councilors Dick Olsen and Ray Kopczynski did campaign — especially Olsen, who did a lot of walking around and handing out leaflets — but their opponents came within a few hundred votes of replacing them on the council. And in North Albany, Kevin Manske outpolled Olsen by about 100.

In a nominally nonpartisan local government, office holders would be wise to acknowledge such strong opposition and to take it into account in their decisions from now on. First they’ll have to figure out why so many residents in the city or their respective wards voted for the other guys.

One likely reason is that in some ways, the council is perceived to be too free or even frivolous in spending money while not paying enough attention to the basic functions of local government. The perception is mostly wrong because the public safety arms of city government have strong council support, and basic services function well, especially water, even though they seem to cost too much.

Still, the city government too often seems caught up in processes and red tape that cause projects to take years instead of months. And while the city government is fundamentally frugal compared to other governments, the occasional frivolity — such as superfluous decorations on the new Main Street roundabout costing up to an estimated $90,000  — stick in the public’s mind. (hh)


6 responses to “City: What the “against” voters want”