City tries to shut down camp under path 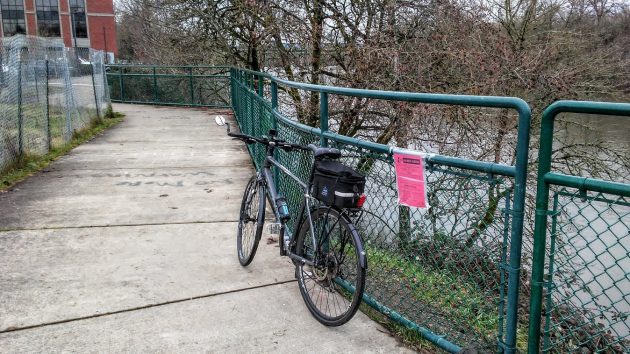 The red notice caught my attention and on Monday I finally stopped to look at it.

The Albany police have cracked down on a long-established transient camp underneath the Dave Clark Riverfront Path. Whether it sticks this time, we’ll have to wait and see.

I had seen the red notice on the fence last week but ignored it until Monday, when I finally stopped and took a closer look:

This area, it said, had been declared an unlawful campsite and a public nuisance. All bedding, other stuff and litter was to be removed by last Saturday morning. If it wasn’t, it might become a matter of criminal prosecution.

The hollow spot under the path, just east of the Wheelhouse parking lot, has been occupied off and on for years. At one time, a few years ago, after cleaning up a ton of trash, the city had a contractor install chain link fencing to keep people out. It wasn’t long before the fencing was bent back or torn down.

Otherwise homeless people have been living rough on the banks of the Willamette — in this spot and up and down the river –for many years. This first came to public attention in a big way in 2006 when then-Councilwoman Sharon Konopa organized the cleanup of Camp Boondoggle and the resettlement of some of its residents.

The city has done many things since then, trying to help people get services and, above all, a roof over their head.  Now and then it organized a cleanup campaign of the kind I reported on last year.

Now in 2021, the new city council may take up the issue once again. At Monday’s work session, Councilors Dick Olsen and Matilda Novak said they had received complaints about conditions in Simpson Park, the wooded riverbank between the Willamette and First Lake. (hh) 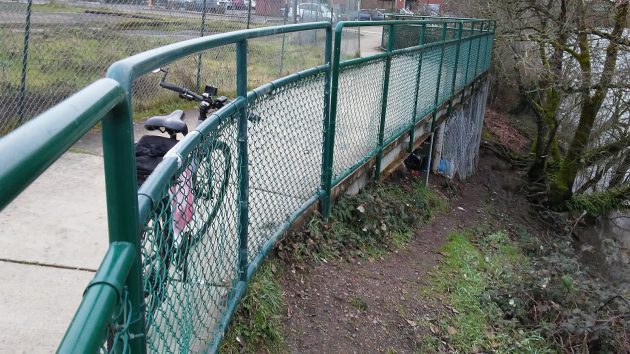 You can see the gap under the concrete path where people have been staying, undeterred by wire fencing.

3 responses to “City tries to shut down camp under path”