Albany to Lowe’s: We still want you – Hasso Hering

Albany to Lowe’s: We still want you 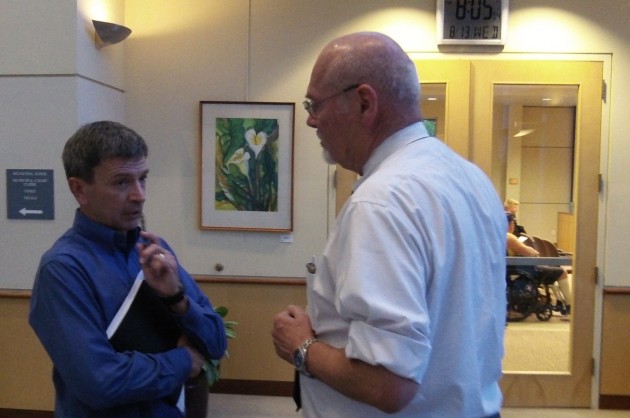 The city of Albany will seek a compromise with Lowe’s that tries to make sure the company goes ahead with plans to build a home improvement center at Oak Street and Ninth Avenue, as it promised in 2011.

Mark Stoner, the California-based western regional real estate manager for Lowe’s, acknowledged to the city council Wednesday that the city had done everything it promised in a 2011 agreement. But he said the company’s plans had changed based on the economy and sales. While Lowe’s had been exanding at the rate of 120-150 new stores a year when the Albany plans were made, it then stopped building altogether but now is resuming construction at the rate of about 12 a year.

The company wants to go ahead with the Albany project but make the building smaller and more efficient: 105,000 square feet, including 85,000 feet of retail space, plus 15,000 square feet in a garden center, instead of the overall total of 150,000 feet origially approved. Stoner said construction would start in May and the store would open in November or December 2015.

The size of the staff would depend not on the building size but on the amount of business. Stoner said a big San Francisco Lowe’s has 350 workers while a smaller one elsewhere has 104; Albany’s would likely be toward the lower number.

As reported earlier, Lowe’s is asking that Albany extend the deadline for opening the store one year to Dec. 31, 2015, allow the smaller size, and forgo the $1,000 per day “liquidated damages” — City Attorney Jim Delapoer says “penalty” is the wrong term — which Lowe’s contract with the city calls for if the store is not opened this year. Albany spent around $5 million to improve streets and utilities and took other steps to accommodate Lowe’s.

Council members said they still want Lowe’s to build, but they also want something for the delay and change in plans. They authorized Delapoer to try for a compromise. The lawyer asked what the council would think if Lowe’s offered to pay the city one year’s property taxes that will otherwise be lost because of the delay. Outside the meeting, he apparently had suggested to Stoner that Lowe’s make such an offer, and the council seemed to like it. This apparently would mean the company would be spared the liquidated damages if the store opens before the new deadline.

Mayor Sharon Konopa got Stoner to declare that the company indeed intends to open a Lowe’s store, not to build the smaller building and then sell it to another retailer. Councilor Floyd Collins thanked the company for clearing the vacant site off Ninth Avenue of weeds. Councilors also asked Stoner to put up a big “future Lowe’s” sign so people would no longer ask them about whether the project was still in the works. (hh)

10 responses to “Albany to Lowe’s: We still want you”