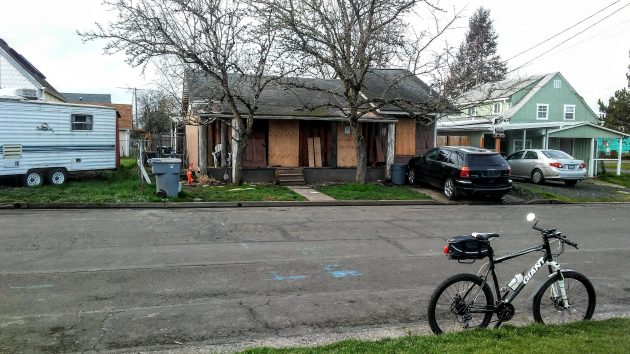 A look at 610 Sherman St. S.E. from the lawn at Hackleman Park on Saturday.

On Friday Albany City Manager Peter Troedsson told the city council about the imminent demolition of a house across from the west side of Eleanor Hackleman Park. On Saturday I went by the address, 610 Sherman St. S.E., to take a look.

The place was boarded up with plywood. A sign declared it a dangerous building. A Chrysler Pacifica without a rear plate sat out front. Nobody seemed to be around.

In his weekly message to the council, Troedsson said the property is scheduled to be demolished Monday. The city had declared it to be an imminent danger to human life, “with methamphetamine residue measured at between six and 60 times the allowable state standard.”

The city says the house also had other safety issues that the owner failed to fix. “Additionally,” Troedsson wrote, “the owner has occupied the premises in defiance of the City Building Officials’ declaration of the property as uninhabitable.”

On Nov. 7, 2019, the Albany Building Appeals Board voted to deny an appeal by the homeowner, David Furry, against the city’s “dangerous-building” designation. As long as the appeal was pending, the owner was not allowed to make repairs, and the board said it wanted him to have a chance to do so.

The board members all said they wanted the owner to be able to get back in his house. Apparently, though, it didn’t work out that way, and over the weekend there was no way to find out why. (hh)

On Sunday night, the city manager explained in an email that the city proceeded to demolition because after that Nov. 7 hearing, repairs to make the house habitable were not made in the 30 days allowed, the house was occupied at unauthorized times, and a final notice of abatement was issued and not appealed. Further, he wrote, “During this time, tests were conducted and bids were taken to determine the cost of abatement if the City were to move forward. One test was a methamphetamine residue test which yielded results ranging from 6 to 60 times over the allowable state level. The final abatement notice has lapsed. The estimate to repair the house to a living condition was three times that of demolition. The building has reached a level of imminent nuisance that requires this action to protect the health and safety of the community.”


7 responses to “City set to demolish an Albany house”