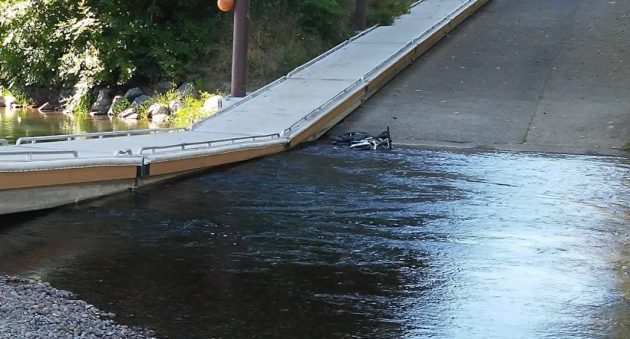 This is what happens when you insecurely park your bike on a boat ramp to take a photo.

The city of Albany has obtained an emergency permit to remove a gravel bar that has made the boat ramp at Takena Landing trickier than usual to use. Now it’s hoping to find a contractor to do the job.

The city put out a request for quotes that were due Aug. 13 but then extended the due date to Aug. 21, next Wednesday.

On July 29, the Department of State Lands gave Albany an “emergency authorization for removal of material in waters of the state.” The permit allows the removal of up to 350 cubic yards, but no more than “necessary to alleviate the emergency circumstances.” All the work must be completed by Sept. 29.

The gravel bar at the landing apparently grew over the winter and spring. It became a problem when the water level in the Willamette River dropped this summer, making it harder to launch and take out boats there. The end of the dock now rests on the gravel instead of floating in the stream.

The city said the situation would hamper any water rescues on that stretch of the river because the fire department would have to launch its boats farther away, at Bowman Park for example.

(I went to take another look on Thursday and leaned the bike against the dock on the Takena ramp. When I turned around, the bike had slid partially into the river, as you can see in the photo above. Lesson learned: Don’t lean your bike on an inclined plane without making sure it will stay put.)

Whatever it costs to take care of the gravel bar, Albany appparently expects to get reimbursed under a federal program that helps with “emergencies due to flooding.” Would-be bidders have been told about requirements connected with federal grants.

Too bad the gravel bar didn’t get bigger and build up upstream of the landing. Then it might have blocked the strong current close to the bank that makes the Takena ramp difficut to use even when the river level is up. (hh) 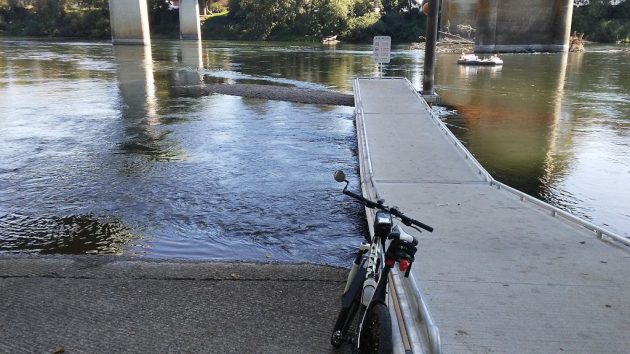 Out on the river, a party floats past the gravel bar at Takena Landing on Thursday.