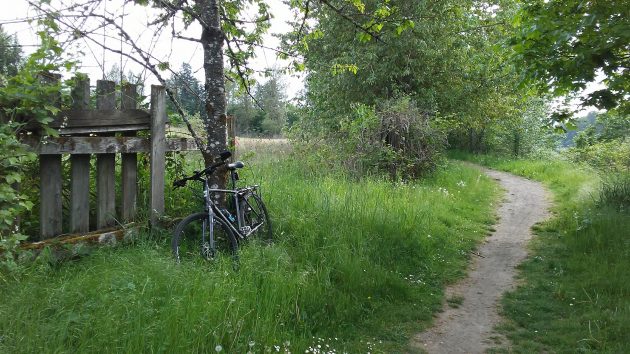 I took this picture of “The Banks” site from the riverfront path in May 2019.

Once again the Albany Planning Commission is faced with having to decide the fate of “The Banks,” a proposed 120-unit apartment complex on the Willamette River across Geary Street from Bowman Park.

Also at issue, though not one of the criteria by which the proposal is to be decided, is the effect of the plan on surrounding properties, a quiet neighborhood of modest houses on mostly unimproved streets.

The city planning staff has approved the apartment plans twice. Last year the planning commission denied a modification of what originally had been a 105-unit proposal, saying the change was such that a new application would be required.

The Salem-based developers, Willamette River View Holdings, did reapply, and the planning staff again determined that the proposal met the criteria of the city’s development code. And as before, neighbors who oppose the project asked for a public hearing before the planning commission.

The hearing, to be held remotely online, will be at 5:15 p.m. Monday, Feb. 1. The public can watch and take part via the GoToMeeting app. The access link is on the agenda, available at cityofalbany.net.

The proposal calls for taking out most of the mature trees on the six-plus-acre parcel, which covers a former industrial site as well as two small houses on Linn Avenue that are to be demolished. The developers want to build eight three-story apartment blocks, a clubhouse, and parking lots with 218 stalls.

Access would be from Geary, near the entrance to Bowman Park. The riverside path connecting Bowman with Simpson Park would be retained. (hh)

3 responses to “City schedules public hearing on ‘The Banks’”