City on canal recreation: No way! 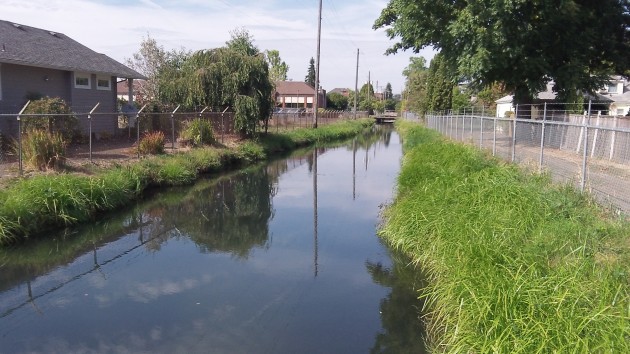 The placid surface of the Santiam Canal says nothing about the issues surrounding this historic landmark.

Albany has told the federal government it has no intention of opening trails or allowing any other recreational use along the 18-mile Albany-Santiam Canal, no matter what it might say in its Town Center Plan or the downtown urban renewal program. And that is just one of the many issues — and a minor one at that — surrounding the canal and the power plant at its end.

(After this appeared, the city says it can still do the canal “esplanades” envisioned in the Town Center Plan because they would be “paths” used for transportation and not “trails” used for recreation. Please see the canal update on Sept. 22.)

The Town Center Plan from the 1990s and the 2001 urban renewal plan mention the possibility of developing paths along the Santiam Canal as amenities to draw people downtown. The canal, of course, is a main component of Albany’s federally licensed hydropower project, and the Federal Energy Regulatory Commission requires that owners of such projects file, every six years, a “licensed hydropower development recreation report.”

Operations Manager Christine Bailey filed the 18-page document on Sept. 3 and also requested that Albany be exempted from the need to file further  reports because no recreation facilities exist on the canal and the city has no plans to provide any. The city, she wrote in her letter to FERC, strives to restrict public access to the canal because of potential hazards such as steep banks and swift current. It also wants to protect water quality from human impacts. “Facilitating or allowing recreational uses along the canal would be a conflicting objective and therefore is not desired or planned by the city of Albany… Albany is not required by its project license to provide public access or recreational opportunities, and the project boundaries do not include public recreational facilities or amenities. On the contrary, Albany takes steps to restrict public access to the canal, for the reasons noted above, rather than encourage it.”

The recreation report is one of dozens of documents available on the FERC website regarding the Albany hydro license. They include the news that FERC considers the city in violation of its license — but won’t take “compliance action” — because Albany missed the annual deadlines for filing so-called “mitigation reports” for the years 2011, 2012 and 2013. Due each January of the following year, those reports outline work done on the project along with steps to protect fish. The city blamed a staff oversight for missing the deadlines, and the three reports were filed in July and August this year.

All this paperwork and other issues along the canal are beginning to make Albany officials wonder about the hydro project. In an email, Public Works Director Mark Shepard says: “We do plan to complete a full cost-benefit analysis in the near future to determine if continued hydro operation makes sense in the long run. There are some regulatory issues we are still working through to fully understand the costs and benefits associated with hydro.”

Meanwhile, the city reports the turbine and generator in the Vine Street powerhouse are making money — if you disregard the costs of paying down the debt incurred to install them. For fiscal 2013-14, the plant operated for 5,114 hours over 227 days and produced 1,633,473 kilowatt hours of electricity. The operation cost $49,680 to run and generated $114,876 in revenue from selling the output to Pacific Power, for a profit of just over $65,000.

Shepard says the city will not see a positive cash flow until the debt is paid off in 20 years. But, he hastens to add, the hydro project has other advantages on issues such as water rights and flow control on the canal. Whether the advantages outweigh the costs including regulatory hassles, the forthcoming analysis presumably will show. (hh)


3 responses to “City on canal recreation: No way!”