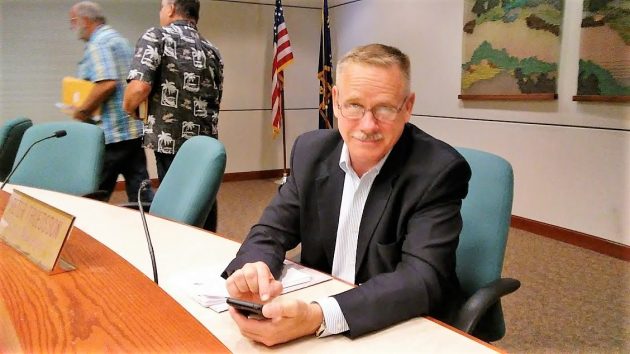 Thanks very much for the big raise, but it’s too much. That essentially is what Albany City Manager Peter Troedsson told the city council Wednesday.

Troedsson is completing his first year in the job, and the council had given him a very positive review a couple of weeks ago. On Monday council members agreed to raise his compensation 12.5 percent, based on his performance plus a comparison with the salaries of similar jobs in other Oregon cities.

At the end of Wednesday’s city counccil session, Troedsson spoke up and thanked council members for the confidence they had expressed in him by approving such a generous raise. But he referred members to earlier budget presentations that highlighted the city government’s money issues, particularly the inadequacies of reserves.

He asked that his raise be shaved back to 7.5 percent. That would be more in line with a customary step increase of 5 percent and a cost of living adjustment of 2.5 percent.  He also suggested that the difference, instead of being paid to him, be used to bolster the city reserves. The council went along and approved his request by a unanimous vote.

Wednesday’s meeting was short and otherwise routine, and when it was over, I asked the manager what this change meant in terms of dollars. He whipped out his phone and tapped out some calculations. With the raise reduced, his annual salary comes to a little more than $164,000. And the city’s reserve fund will have about $7,500 more.

This is but a small example, but you can see why the mayor and council have been so pleased with their new manager’s style. (hh)