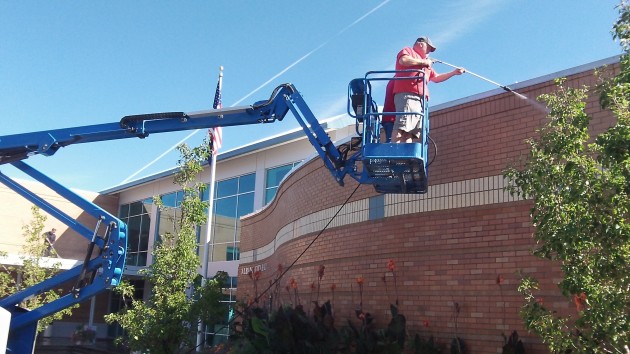 Pressure from on high: City Hall gets hosed.

Passersby headed for the Albany Farmers’ Market last weekend witnessed a thorough cleaning at City Hall. No symbolism was implied, intended or (as far as I’m concerned) justified.

It was routine maintenance that a crew from Hart’s Janitorial was performing on the building’s exterior. The brick facade facing the City Hall Plaza at Fourth and Broadalbin was pressure-washed, and all the exterior windors were cleaned as well.

“We clean the outside windows about once a year,” City Hall spokeswoman Marilyn Smith explained after checking with Rick Barnett, who oversees building maintenance. “But it had been about 10 years since the exterior was pressure-washed.”

Now the bricks look like they’re good for another 10 years at least, a reminder of how nice — and indeed crucial — it is for a town to have a clean City Hall in every sense of the term. (hh)