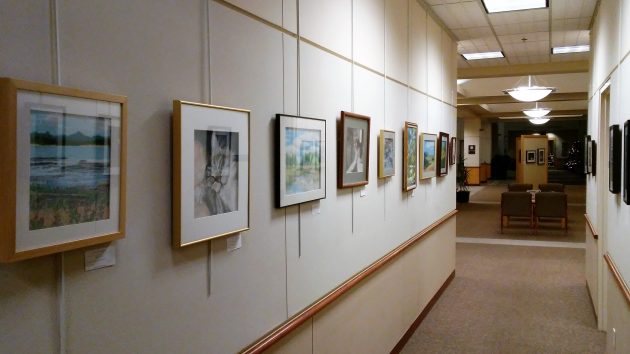 Paintings line the main public hallway at Albany City Hall. Why no people? It was late at night.

I know it seems unlikely, but it’s possible to get bored at city meetings, especially when they take all night. If you’re an observer and not a participant, one way to bridge the slow parts is to step outside and amuse yourself by checking out the art hanging on the walls.

Every month or so, the volunteer Albany Arts Commission arranges for a new collection of works to be displayed in the lobby of City Hall, right outside the council chamber, and down the long hallway that stretches to the Third Avenue door. This month, what you see there are the works of Billie and Michael Moore.

In a City Hall announcement a couple of weeks ago, both artists were described as former members of the Arts Commission. The announcement said Michael uses pastel sticks to apply color to various kinds of paper surfaces including sandpaper. You can spot some examples of this in the display. His wife’s oil paintings are inspired by her cats, among other things, and I think I saw at least one of her cat paintings as well.

On other occasions over the years, I remember being impressed by City Hall displays featuring the work of students as well as many adult amateur and professional artists. The show changes every few weeks, and it’s worth taking a look next time you’re at City Hall. Maybe it’s not the Louvre, but it’s better than that because it’s local, it’s free and there are no long lines to get in. (hh) 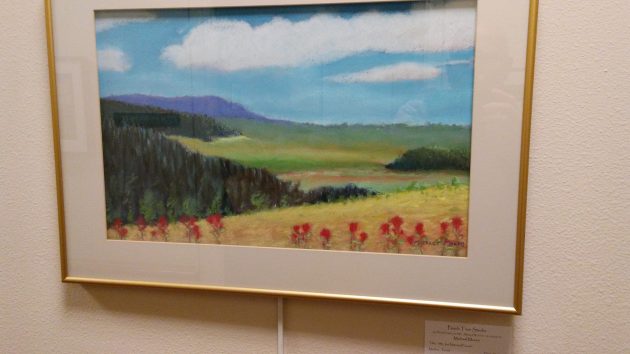 One of Michael Moore’s landscapes on display this month.