City pump at work on Broadway 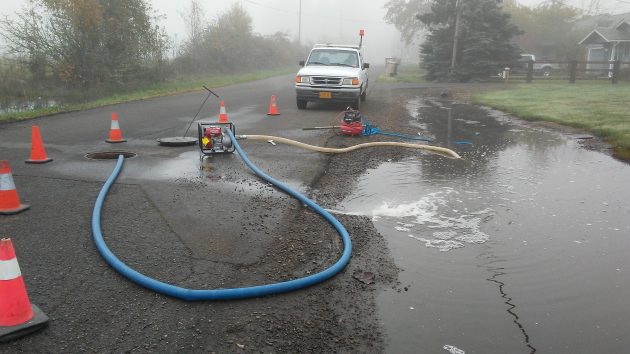 After going on all day Monday, the pumping continued in the fog on Tuesday morning.

Albany has jumped into action to deal with a big puddle of runoff that started overflowing a part of Broadway Street S.W. this fall.

The city council got a report Monday from Manager Wes Hare and Chris Bailey, public works director of operations. The gist was that public works had deployed a crew to pump away the standing water and is preparing a to build a permanent solution: A pipe to connect the area to an existing city storm drain about 150 feet to the south. From there, the water would head toward Oak Creek and the Calapooia River.

At the same time, Hare and Bailey said, the city will have tests done on the surface water, which is draining from the Albany Research Center of the U.S. Department of Energy on the east side of Broadway. The city wants to make sure there is no pollution present in the runoff, which might complicate efforts to collect it and sluice it down the storm drain.

The federal government did more than one evaluation of the Research Center’s undeveloped 14-acre “South Forty” on the east side of Broadway. A report from the 1980s documented some traces of radioactive elements in the water from the field but said they were harmless. Later, after more reviews, the government declared the site to be free of any restrictions.

In 2005 officials became aware of an underground plume of TCE, a solvent, on the Liberty Street side of the Back Forty. As a result, test wells were ordered to keep track. Liberty School was tested and found free of TCE in the drinking water and air. (hh)

This story has been updated with a photo from Tuesday morning.


13 responses to “City pump at work on Broadway”