City gets ready to foreclose on old house 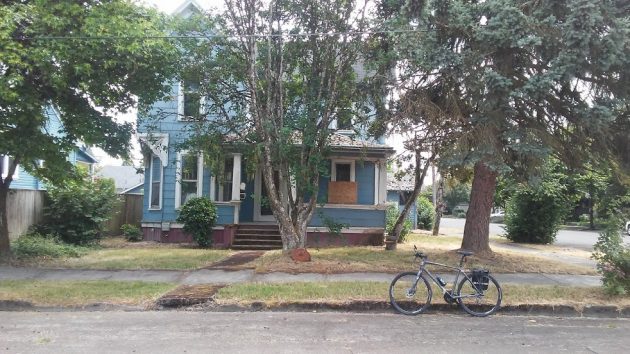 The house at 732 Fourth Ave. S.W. on Monday afternoon.

The city of Albany is on the verge of doing something about another old house in the Monteith Historic District. The house had code enforcement issues and has sat empty for some time.

The house, at 732 Fourth Ave. S.W., dates from about 1890 or so. From appearances it needs all kinds of work inside and out. The city had about $85,000 in liens against the property when I last looked into it back in March. The city had spent $2,753 get the lot cleaned up, and the rest of the accumulated lien amount consists of fines and interest.

Federal National Mortgage Association is the owner of the property.

There was some informal talk about the house at the city council meeting last Wednesday. And on Friday, City Manager Peter Troedsson told the council in his regular weekly summary: “With the bank being unresponsive to requests to work with us on liens and compliance issues, we’re beginning the process of foreclosure on the bank.”

The city’s demand letter will allow 30 days for a response, he said. If there’s no resolution, the city then plans to file for foreclosure in court. Troedsson thinks the “process” may take up to 10 months.

If the city ends up owning the property through foreclosure, what then? It would presumably put the place up for sale, hoping that a buyer would want to restore it. But what if the cost of rehabilitation is greater than what the house could fetch on the market?

Having just gone through a controversy about the demolition of three houses a few blocks away, the council may want to think about how to handle this old house when and if it falls into the city’s hands. (hh)


4 responses to “City gets ready to foreclose on old house”