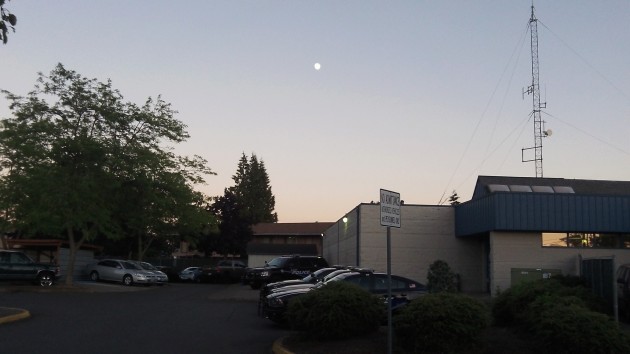 Police won’t expand here; those apartments in background can stay.

The Albany City Council has given up on the idea of keeping the police headquarters on Jackson Street, next door to the Linn County Sheriff’s Office and jail. Instead, the council decided Wednesday to revert to Plan A, which is to build a new police station on nearly 4 acres of city-owned vacant land on the west side of Pacific Boulevard S.W.

The police wanted to stay where they are if possible. But one of the owners whose property was necessary for expanding the existing station wanted more money than the city was willing to pay, so the council voted 5-1 to go with the original plan on Pacific.

The trouble is that the voters rejected that plan once, last fall. While no one knows whether the location was decisive or even a factor in that outcome, at least a few people had publicly objected to the Pacific site as unsuitable. Chances are they’ll speak up again, and the last thing this whole project needs is more reasons — or pretexts — for voters to turn it down.

The city would have to buy an apartment house and several other parcels near the present site in order to remodel and enlarge the station. One whose parcel is essential wanted a quarter-million dollars more than his previous estimate, and Police Chief Mario Lattanzio said this made property acquisition of the essential land too expensive at $2.1 million, so he recommended that the idea of expanding there be dropped. Councilor Rich Kellum was the lone no vote. He suggested making one more attempt to get the land at a lower price, but he was outvoted.

Councilor Floyd Collins spoke in support of going to Pacific. Among his points was that in 20 years, the department would not find itself boxed in and unable to expand, as it is now.

On the other hand, while nobody said so Wednesday, in 20 years or even sooner the police may find that their new home on the west side of town — away from the jail and farther away from the growing east side — is so inconvenient that they will wish a bigger effort had been made to let them stay where they were. (hh)