City comes to the rescue, quickly 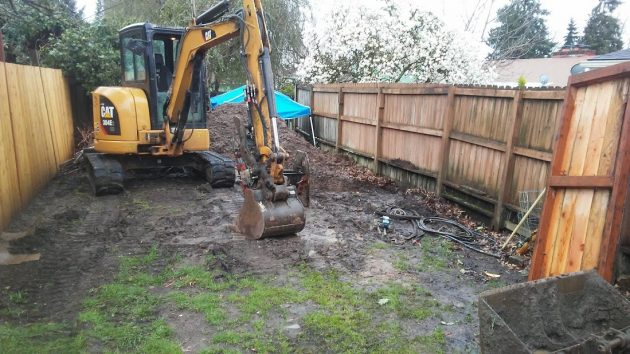 What’s going on in this west Albany alley is an emergency repair job. A friend who lives behind that fence on the right told me about it, and I checked it out because it’s an example of a helpful but largely unheralded program the city of Albany runs.

The problem here was that the sewer line from the house to the main had failed. The line was made in the 1950s and supposedly consisted of — this is hard to believe — essentially rolled-up tar paper. Naturally, it deteriorated over time. Ray’s Septic Service had cleaned out the pipe when it backed up some time ago, but then this week the line completely failed.

The sewer lateral from the house to the main normally is the homeowner’s responsibility, and replacing it can cost thousands of dollars. But in 1999, in an effort to prevent rainwater from entering the sanitary sewer system and overloading it, the city council approved a program to help homeowners replace failed laterals at city expense.

The city normally reviews each situation with contractors and awards the job to the lowest bidder. That was the plan here after the homeowners, Claus and Kim Sass, contacted Lindsey Austin of the engineering staff in Albany Public Works. But on Thursday, flooding in the garage and elsewhere became dire.

“By 2 p.m. today Lindsey was here, working with the contractor,” the homeowners told me. “The work will be completed tomorrow. We are totally amazed and grateful.”

Friday afternoon, I took some pictures as a crew from E.D. Hughes Excavating Inc., of Philomath, was doing the muddy work of installing a new lateral to the sewer main in the alley behind the house. They didn’t quite get finished and will be back on Monday.

At City Hall, communications officer Marilyn Smith reminded me of what can happen when laterals fail. A family was having a kids’ sleepover in their basement, and it came to a soggy end when the students found their sleeping bags awash in, er, well…

Marilyn remembers writing about that slumber party disaster toward the end of her time as a reporter for the Albany Democrat-Herald. Now, she told me, the lateral replacement program has an annual budget of $250,000. “So far this fiscal year, we have completed 30 replacements; in an average year, we do about 50, according to City Engineer Staci Belcastro. The cost of each replacement varies due to site conditions, but this year, the average has been about $5,000 each.”

There’s more on this program and how it works on the city of Albany’s website here. It helps the city’s sewer utility by cutting down on infiltration from rain, and it certainly is a big help to homeowners in neighborhoods where underground utility pipes are falling apart. (hh) 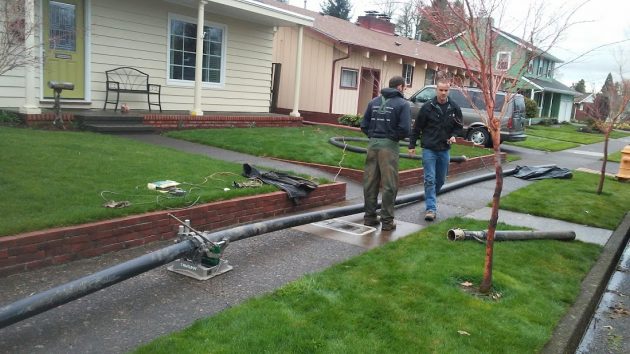 New pipe is laid out on the sidewalk, ready to be installed.


6 responses to “City comes to the rescue, quickly”