City buys a building, but not this one 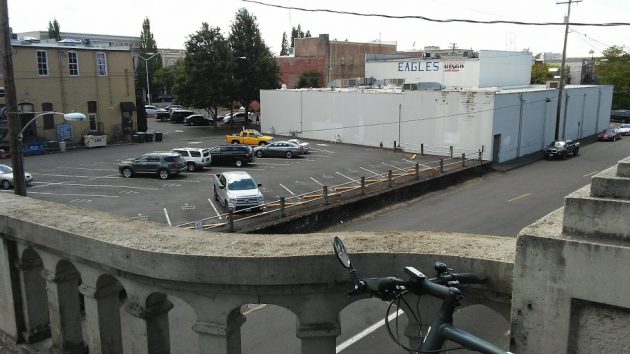 The Eagles building, viewed from the Ellsworth Street Bridge on June 21.

The city of Albany’s urban renewal agency is buying a building within its district without saying publicly which one. But it’s not the Eagles club at Broadalbin Street and Water Avenue, which is no longer for sale.

The city has tried before to acquire the Eagles property, and last year it was listed for sale. But nothing came of it. And last week, Ed Perlenfein, an Eagles trustee who lives in Millersburg, told the advisory board of the Central Albany Revitalization Area that the club is doing well, that it has signed up 172 new members, and that its building is no longer for sale.

Perlenfein appeared before the CARA board under “business from the public” along with Michael Quinn, another member of the club. Quinn asked that CARA consider the club when it launches a program to redevelop the Willamette riverfront along Water Avenue. He suggested extending the “promenade” treatment on Broadalbin down the block in front of the Eagles the way it was done from First Avenue to Third.

Unrelated to that topic, the CARA board went into closed executive session later in its meeting last Wednesday to discuss a real estate transaction, as allowed by the Oregon public meetings law.

When the CARA meeting was over, it was time for the Albany Revitalization Agency — the city council — to meet. You can listen to the audio recording here.

Without further discussion, council members (without Bessie Johnson, who was absent) voted unanimously to “direct the staff to execute an option to purchase a building within the CARA district.” The motion purposely did not identify the property or name the price.

I asked Councilman Rich Kellum, the chairman of the ARA, why the council was not naming the building it had taken a public vote to buy.  “To protect the businesses in the building,” he replied. (hh)


19 responses to “City buys a building, but not this one”