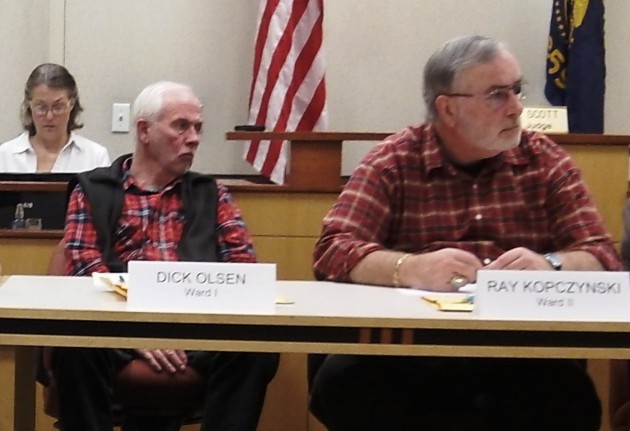 Councilors Olsen and Kopczynski in a photo from February 2014. On Wednesday they were on opposite sides of a vote proposed by Kopczynski.

So what happens to Albany’s police station on Jackson Street once the city completes — probably in about two years — construction of a new cop shop on Pacific Boulevard? Everybody assumes the old building will be sold. If so, what happens to the proceeds?

Councilman Ray Kopczynski wants to give the public an assurance that the money will be applied to reduce the cost to taxpayers of the new building. But with two members absent on Wednesday, he could not muster the four votes required to get that message adopted by the council. Councilors Bessie Johnson and Rich Kellum voted with him, but Dick Olsen wasn’t so sure and voted no. What happens, Olsen wondered, if someone wants to buy the property but offers the city not cash but another property the city wants or needs?

The discussion is not over, though. Mayor Sharon Konopa said the question will be brought back in two weeks when the council meets again, on June 10. It’s kind of academic, though. Even if all six councilors vote to adopt Kopczynski’s proposal, any four votes can make a different decision when the time comes. Kopczynski knows that, of course, but he nevertheless wants to give voters and taxpayers a signal of the council’s intent.

No one has offered to buy the old police station, but City Manager Wes Hare said there had been some expressions of interest — how recent he didn’t say — from both private and public parties. Over the years, there has been vague talk that Linn County might buy the property, adajcent to the sheriff’s office and county jail. The county has long wanted to open a courtroom in or near the jail building for arraignments, though in recent years the use of closed-circuit TV has made that seem less urgent.

In the election that ended May 19, Albany voters approved an $18 million bond issue to pay for most of the cost of building the new police headquarters and replacing the downtown fire station. From now on, Konopa announced, she wants to have a public progress report on both projects every time the council meets. (hh)