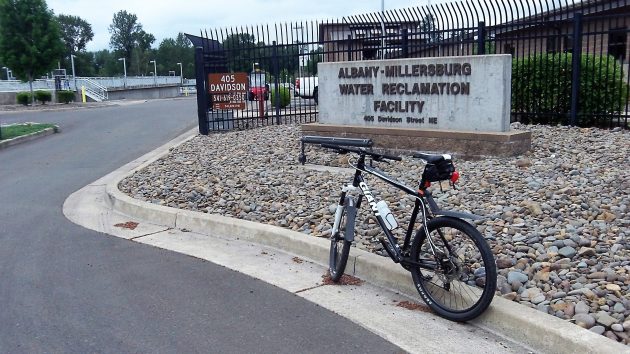 At the gate of the wastewater pant in May of 2016.

Here’s an update on the Jan. 15 story reporting on the preferred alternative for solving the pesky problem of what to do about undigested solids produced at the Albany-Millersburg Wastewater Treatment Facility — the sewage plant, in other words.

On Thursday night, the two city councils agreed to continue investigating composting as the preferred alternative for getting rid of the solids at the treatment plant. The stuff has been trucked to Coffin Butte at the cost of about $650,000 a year since the treatment plant opened in 2009.

Among other things, this process will look at potential sites of a composting facility, a phasing plan, regulatory issues, and markets for compost. The effort will also define a layout and refine the estimate of the costs.

The cities will call for proposals from consultants to do this preliminary investigation, and after the councils approve one, the study should be completed this year, according to Kristin Preston, Albany’s wastewater superintendent.

The site to be acquired for composting should be seven acres in size or larger, and not more than 10 miles from the treatment plant. City officials say they have not yet identified any potential sites. But any site considered should be zoned for industrial or commercial use.

Members of both councils were particularly interested in the issue of odor. Public works officials and a consultant said the mixing of the stuff would be done inside a closed building to contain the odor, and the compost itself would smell only like, well, compost.

Hundreds of other American cities big and small use composting to deal with solids in the sewage treatment process, the councils were told.

No reason to repeat the entire background on this issue. If you’re not familiar with it, check the previous story here.

4 responses to “Cities to pursue composting”