China and the price of recycling 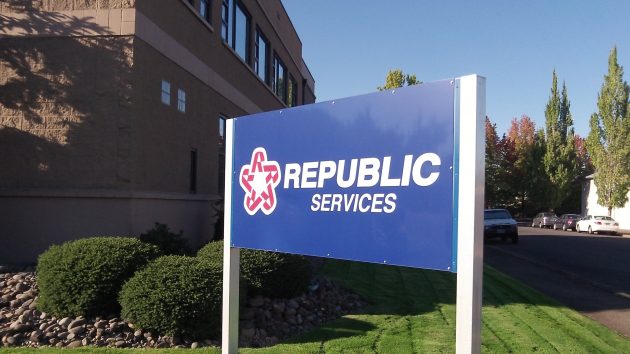 The local headquarters of Republic Services in Albany. ( September 2016 photo.)

Recycling has become almost a religion in Oregon and now is about to become more expensive, if it survives at all. That’s the word from Republic Services, the refuse collection and recycling company in Albany and elsewhere.

One problem is that people have been throwing a lot of trash into their commingled recycling carts. Another is that China, which buys most of the sorted recyclables from the West Coast, has cut the allowable contamination of the material from no more than 2 to 0.5 percent, a standard impossible to meet. Yet another is that the markets for certain kinds of recyclables have altogether disappeared.

Some refuse companies in Oregon, in Medford for example, have limited what people can toss in their carts. No more magazines, for instance, though newspapers and ad inserts are still allowed, as are cardboard and tin cans. But pretty much nothing else.

In Albany, Republic Services is taking the issue to the city council on Wednesday night. It came up with three options: 1. Urge customers to be more careful about what they put in their carts and charge them $2 more per month. 2. Forget about recycling and take everything to the landfill, and raise the monthly fee $1 to reflect the dumping costs. 3. Combine continued weekly commingled curbside recycling with weekly yard debris pickup, with the added benefit that food waste can go in with the yard debris, but jack up the monthly price $4.50.

However this shakes out, in the long run we clearly we need a new approach. It makes no sense to keep piling up discarded material for which there is no economical use. Dumping it in a landfill may be the best for now, but how long can that go on? One of these days Coffin Butte will be full, and it looks to be getting pretty close.

The answer — obvious but hard to carry out — is to buy less stuff in wrappings that need to be thrown away. If you buy an office chair that comes in a huge box, tell them to unpack it because you want only the chair. And let’s tell China to quit sealing everything they make for us, including that pack of dental floss shown here, in those plastic bubbles. Not only can’t the bubbles be recycled, but they are hard to open without a knife. (hh)

23 responses to “China and the price of recycling”