‘Cheese grater’? That project’s off 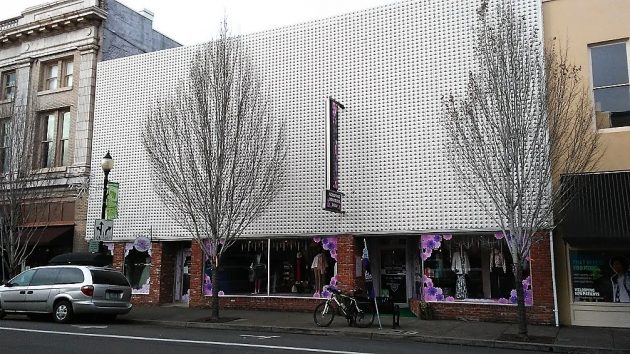 As you noticed, the “cheese grater” has not disappeared from the front of 415 First Ave. W.

The fabled “cheese grater” on Albany’s First Avenue — a sign of progress in the 1960s and now considered an architectural atrocity — is staying up there, at least for now.

Last summer it looked as though the historic façade at 415 First Ave. W., hidden behind that aluminum addition for more than half a century, would once again see the light of day. But it has not happened and likely won’t any time soon.

In July the tenant, Mercy House International, announced plans to buy the building and renovate the storefront at a cost then estimated at $320,000. This would include restoring the original arched windows on the second floor, which were covered up by the metal wall when the address housed an appliance store in the 1960s.

The window job was going to cost around $62,000, and Mercy House asked for $10,000 from CARA, the Central Albany Revitalization Area, toward that expense. CARA approved the grant on July 18.

But plans have changed, I learned this week. The building dates from 1866 and is one of the oldest downtown. The now vacant and unused upstairs is said to have housed a speak-easy during Prohibition. And as I understand it, the estimated cost of renovating the structure and bringing it up to modern requirements proved far too great. So Mercy House has dropped the plan to raise money to buy the property and fix it up.

Mercy House says it helps women recover from the effects of spousal abuse. To raise money for its programs, it runs a business on the ground floor, a boutique named “1st Hand Seconds.” The manager, Colleen Anderson, was not free to go into the details when I talked to her Thursday, but she confirmed that the organization had dropped its plans at that address.

The CARA grant is out of the picture. Such grants are paid to reimburse recipients for specific project expenses, and since Mercy House won’t restore the storefront, the money won’t be paid. (hh)

10 responses to “‘Cheese grater’? That project’s off”