Checking in on Millersburg Love’s 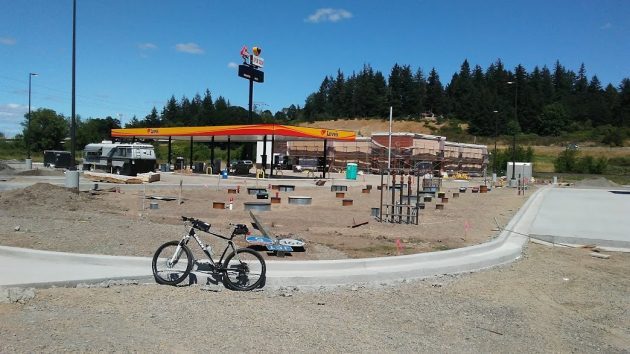 On Saturday it looked like the Millersburg truck stop is still some time away from being ready.

Wondering how things were coming along at the new Love’s Travel Stop and Country Store, I took a ride out to Millersburg on Saturday.

For a while now, travelers on I-5 have known that an Arby’s restaurant is going to be part of this truck stop. A big sign has told them so. But when? All it says is “soon.”

When I checked in April, a worker told me the place would be ready on July 11. Someone with apparent inside knowledge commented that that’s the day the general contractor was to turn the place over to the owners, and a grand opening was planned for July 25.

Those dates now appear to be optimistic, judging from the looks of the site. The main building still has scaffolding on the outside. The fuel stations remain to be installed. And the huge surface has yet to be paved.

I’ve inquired with Love’s headquarters in Oklahoma City but haven’t heard back. My previous commenter told me the opening will be later but didn’t give a date.

But if you like Arby’s, you can look forward to that. Or you can go to the recently remodeled Arby’s in Albany if you don’t want to wait. (hh)

On Monday I heard from Kealey Dorian, who works in Love’s media relations. She didn’t have an opening date other than “later this summer.” She confirmed that the place will be open around the clock. In response to other questions from me, she wrote: “The travel stop will offer convenience store items like snacks, coffee, fountain drinks, travel merchandise, portable electronic accessories and more. In addition to the travel stop, the location will offer an Arby’s restaurant, laundry facilities, a Love’s Truck Tire Care facility for professional truck drivers, and approximately 72 truck parking spaces for professional drivers. Altogether, the store will employ approximately 70 people.” 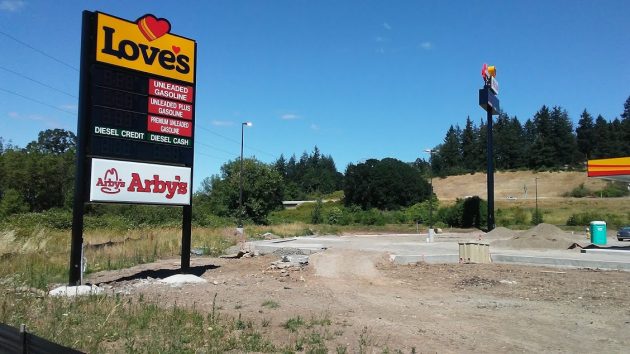 The signs are up, including a tall one visible from the freeway in the background.


3 responses to “Checking in on Millersburg Love’s”