Check out what Putin said 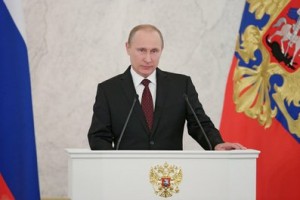 The Kremlin website published this photo of Putin with his speech.

This may sound odd, but it is possible to feel sorry for Vladimir Putin. The president of Russia wants his country to achieve better results in the economy and also in, among other things, education and health care. But judging by a long speech he gave to the Russian Federal Assembly on Dec. 12, progress has been stymied by bureaucracy, corruption and general inaction.
We think of Putin as an autocrat, which he is, but read his speech and you get the feeling that officials and institutions across that huge country have found a way to ignore demands and edicts from the capital. Putin alludes to how much more effectively things — like business permits, for example — are done in the United States and other developed economies. He pleads for a new motto along the lines of “Once a decision has been made, it should be carried out.”

Putin ticks off Russia’s many problems, including illegal immigration and ethnic strife. He pleads for action to boost the economy with science and innovation. He proposes tax holidays for job-producing investments. He complains about offshore tax evasion. In general he sounds like Peter the Great, trying to push his fellow Russians to catch up with the modern world. But not on one particular issue. He draws the line on gay rights.

Putin says Russia is defending “traditional values that have made up the spiritual and moral foundation of civilization in every nation for thousands of years: the values of traditional families … .”  And he explains: “Of course, this is a conservative position. But speaking in the words of Nikolai Berdyaev*, the point of conservatism is not that it prevents movement forward and upward, but that it prevents movement backward and downward, into chaotic darkness and a return to a primitive state.”

The Kremlin makes the speech available on the Russian president’s website, http://eng.kremlin.ru/news/6402. Read it if you want to get a glimpse of Russia’s problems and also go beyond the Putin caricature that we usually get. (hh)