Charter school: Worth the risk

Ideally, school boards ought to jump at the chance of sponsoring charter schools. But as expected, the Albany School Board turned down a request to allo 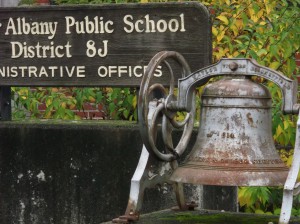 As the Albany Democrat-Herald’s Jennifer Moody reported on Tuesday (Nov. 27), members of the Albany board felt that the proposed school would offer pay levels too low to get good teachers and was not planning to spend enough money on technology. And besides that, it didn’t even have a site nailed down.

Here’s what was missing from the reasoning: The legislature authorized charter schools in 1999 in order to shake things up a little. The law was passed “to create a way to take responsible risks to create new, innovative and more flexible ways of educating children within the public school system.” So yes, there’s some risk in setting up these schools. But the risk is what the law is asking school boards to take, not to avoid.

The board worried about having to give up money. But it would also be dishing off a proportional number of students, so the money would likely be a wash.

What about achievement standards? Of Oregon’s more than 100 charter schools, some meet the state standards and some don’t, just like the rest of the public schools. But Sand Ridge, a charter school within the Lebanon district, shows that success is possible. Sand Ridge has been rated “outstanding” on the Oregon rating system, and it also met the federal goal of making yearly progress.

The Albany board has been too timid. The backers of this would-be charter school now hope to find another sponsor, as the law allows, perhaps Linn-Benton Community College or the state itself. Let’s wish them luck. (hh)

From Hazel Siebrecht: I read on the Oregonian site yesterday that Oregon is fourth in the nation for kids not graduating high school! If they will attend a charter school which is obligated to meet certain criteria, that is a vast improvement on dropping out. What do low-paid teachers have to do with anything if their students are meeting the standards? ?