Change the rules on historic review 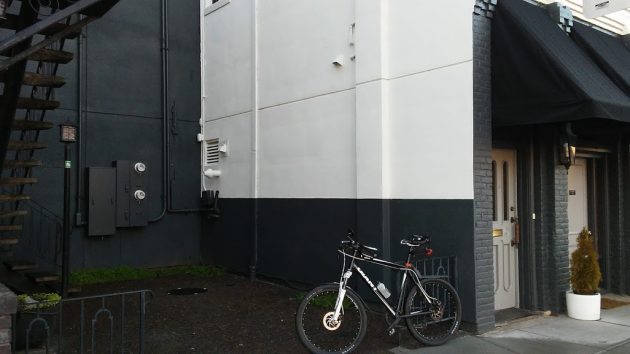 This is the place (shown on Jan. 6) that was the subject of a public hearing concerning ventilation.

On Dec. 5 the Albany Landmarks Advisory Commission held a public hearing and approved the installation of a bakery’s exterior vent. Why a hearing and all the bureaucracy that goes with it for such a routine item? That’s a question the city council might want to ponder and then do something about.

The issue involved Sprinkles, the recently opened bakery at the southwest corner of Second and Ellsworth in the former Tripp & Tripp realty building. There’s a louver in the back wall, but the building department says that’s not good enough for venting the aromas of baking. Apparently, according to state building and fire codes, this exhaust has to be vented to the roof. But the building dates from around 1904, and this puts any exterior alterations, even on a back wall, under city jurisdiction for historical review.

The $43 filing fee for such the review is the least of the ramifications. Once an application is submitted, which in this case was done on Oct. 24, the city planning staff goes into action, starting with a three-page public notice to owners within 300 feet, issued on Nov 13. Then the application has to be evaluated against standards intended to preserve historic buildings. The staff report on the Sprinkles vent ran to seven pages and came out on Nov. 28.

There were two ways the venting could be done. One was through the existing hole for the louver and up the wall in a pipe that would then jog around an upstairs window. Or a new hole could be cut in the wall a little to the side, with a pipe straight up to the roof.

The staff report said either would be fine, but it added this ominous note: “Staff finds that all applicable criteria are satisfied, but also recognize (sic) that the LAC may reach a different conclusion and find that the proposed material or design should be changed to meet the criteria. If the LAC is not convinced that the criterion (sic) for considering the exterior alteration are met, the LAC may apply conditions of approval or deny the request.”

In the event, all five members of Landmarks present on Dec. 5 quickly voted to approve either ventilation option after hearing from Jolene Wilson, the owner of Sprinkles, and contractor Ty Bilyeu. They also heard from Chet Houser of the Monteith Historical Society, who supported the project and had this advice, according to the minutes: “He asked about the possibility of a waiver on some of the regulations if necessary to complete the project.”

Exactly right. If some state code requires a vent pipe so an old building can continue to serve a useful purpose  — is there anything in life more useful than what a bakery makes? — and if this has no effect whatever on any historic feature of the outside, why require a long process, and hearing before a city board, to allow the necessary work go ahead?

Some on the council have been critical of Landmarks decisions. They ought to change the rules instead. (hh)