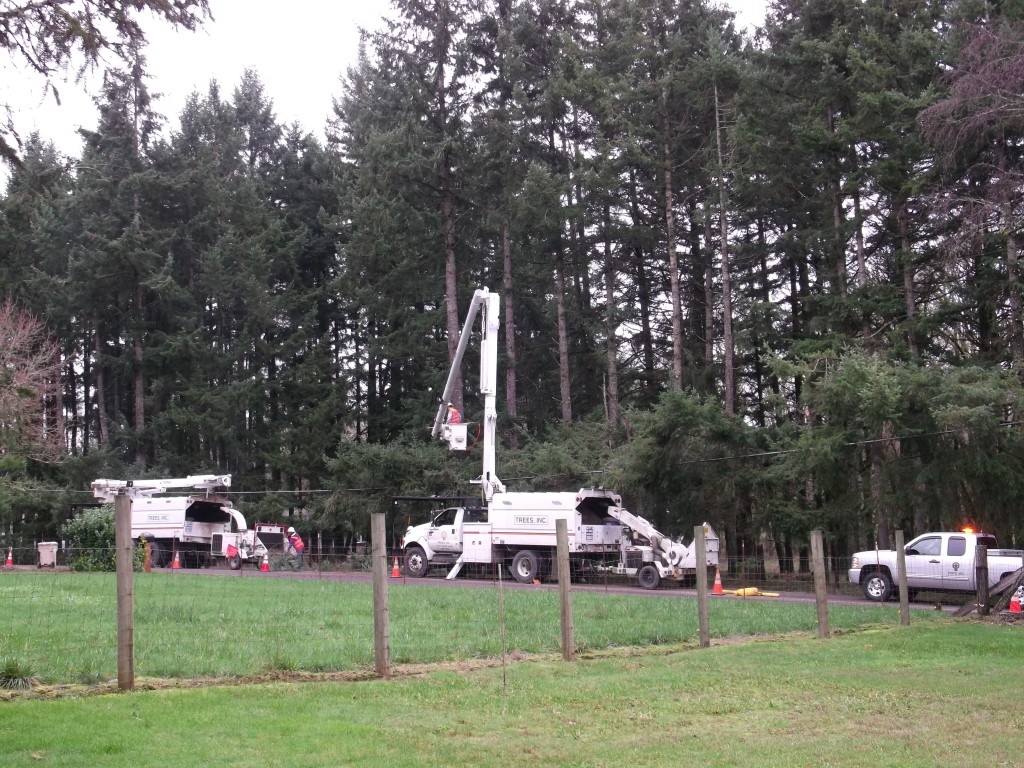 Since before Christmas, the tree trimmers have been busy on the county road in front of our house. They’ve been chainsawing branches above and near power lines. It has to be an expensive operation. There are two trucks with buckets at the end of long booms, each one trailing a chipper that chews up the limbs of Douglas fir and other species and spits the resulting mulch into the trucks’ hold. Five or six crew members run the operation, as far as I can see. They start early in the morning and don’t finish until dusk, and they’ve been at it for more than a week on this stretch of road alone while other crews have been doing the same elsewhere in this area.

(Pacific Power confirmed my guess that all this is not cheap. From Portland, spokeswoman Jan Mitchell tells me that “PacifiCorp spends more than $45 million a year systemwide (6 states) on vegetation management, about $20 million of it in Oregon, and $4 million in the Willamette Valley. We worked more than 900,000 trees in 2012 as of the second week of December – more than 500,000 in Oregon and nearly 70,000 in the Willamette Valley.”

The pruning crews work for Trees Inc., a nationwide company based in Houston. A map on the company website implies that right about now in much of the country it is doing the same kind of work that I can see from my window on our road. And despite this monumental effort and expense, tree limbs still hit power lines and cause blackouts every time there’s a major storm.

You would think that by now, the lesson would have sunk in: Don’t plant or keep tall trees anywhere near power lines. Pacific Power has a brochure on its website showing what height of trees is OK. It’s not complicated: The taller the tree, the farther from the line it should be. But from the evidence at hand, few landowners pay attention to that information, at least around here. If more did so and acted accordingly, cutting down trees that jeopardize the lines, we’d have less to worry about the next time we get hit by a storm.

A reader opined on Facebook that some of those big trees may have been there before the lines were installed. If so, maybe they could still be cut down to keep from having to repeat the pruning every other year or so. Considering the expense of vegetation management and the risk of blackouts in bad weather, it would make sense — at least to me — to make sure power lines are out of reach of overhanging trees. (hh