Cell tower: How tall is too tall? 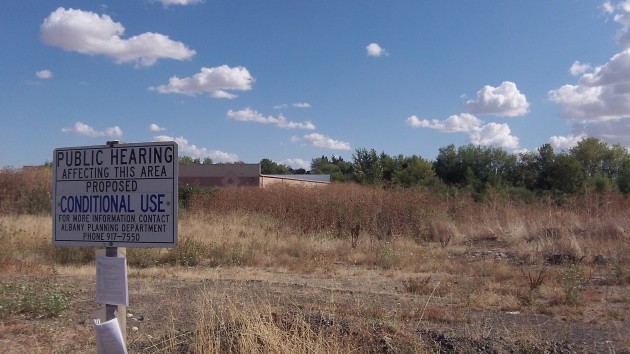 The pole would rise somewhere to the right of the rear of the bowling alley in the background.

Verizon wants to build a cell tower in southwest Albany, and it needs a conditional use permit to do so. The city planning commission has turned the company down, and the company appealed. Now it’s up to the city council, which will hold a public hearing when it meets at 7:15 p.m. Wednesday, Aug. 27. The question is whether there’s anything wrong with a single tower, a monopole, that would reach 120 feet into the sky behind the the Lakeshore Lanes bowling alley.

Verizon says it needs a tower in that vicinity in order to improve phone coverage between Albany and Tangent, and the vacant property near Pacific Boulevard and 53rd Avenue S.W., owned by Jerry Schneider of Schneider Homes of Tukwila, Wash., is the only possible place because other owners in the neighborhood have turned it down.

The planning commission said that may be so, but the zoning is mixed-use commercial and the structure’s height is way out of proportion to what else might some day be built there. 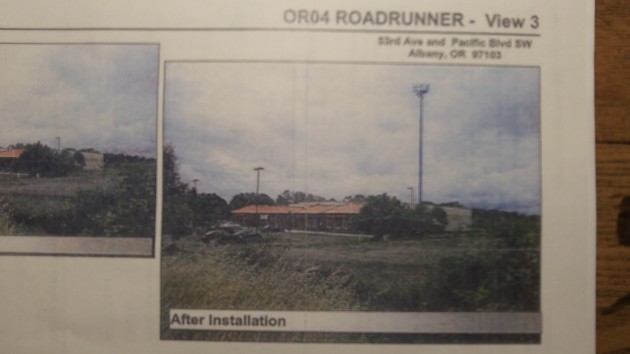 Verizon calls this project “OR04 Roadrunner.” The application for the Roadrunner conditional use permit includes some mock-up photos of what the pole would look like in the landscape behind the bowling alley. As you might guess, it sticks up 100 feet above the 20-foot-high building.

Cell towers may be a blight on the landscape, but now they are everywhere. Do we still notice them or pay them any particular attention? It’s hard to make the argument that only because of its height, this tower is any worse than or different from cell towers in general. Well no, actually it’s easy to make the argument but hard to make it believable enough so that it sticks.

As a monopole, this thing looks like a super flagpole with some wiring on top. Chances are that if Verizon wins its appeal and gets to build this needle in the lower sky, people driving past will notice it, but only for a while. (hh)


6 responses to “Cell tower: How tall is too tall?”