Caught in the act: Surreptitious dumping 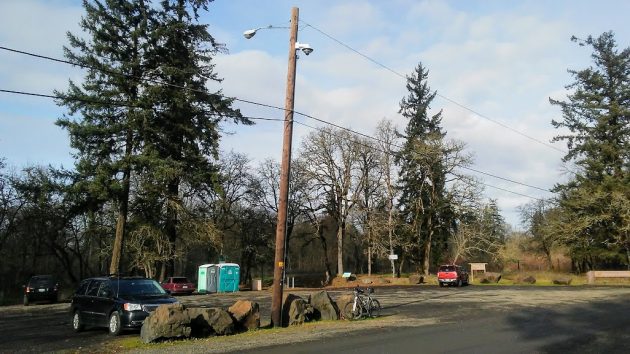 See if you can spot the surveillance camera keeping an eye on the parking lot at Talking Water Gardens and Simpson Park.

Sometimes video surveillance of public property pays off. Consider, for example, the entrance to Albany’s Water Gardens, which not too long ago somebody mistook for a good place to discard a couch.

City Manager Peter Troedsson told council members about it in one of his weekly summaries of matters of interest. I read that and asked for the details.

Kristin Preston, who oversees the city’s wastewater system, passed along the gist of it. A couch, she said, was dumped in the parking lot of Talking Water Gardens and Simpson Park. A surveillance camera captured the vehicle plates, and the video was turned over to the Albany police for illegal dumping.

This happened almost three months ago, at 8:57 on the night of Saturday, Sept. 29. I wondered what happened to the dumper. “The investigation is still open, according to Lt. Travis Giboney,” Marilyn Smith at City Hall told me on Dec. 12. “He promises updates as he receives them from the investigating officer.”

There’s been no update in the case of the discarded couch, so maybe tracking down the culprit, if only to get back the city’s fifty bucks, is more complicated than it would seem. (hh)


7 responses to “Caught in the act: Surreptitious dumping”