‘Catenary’ or not: More city lights 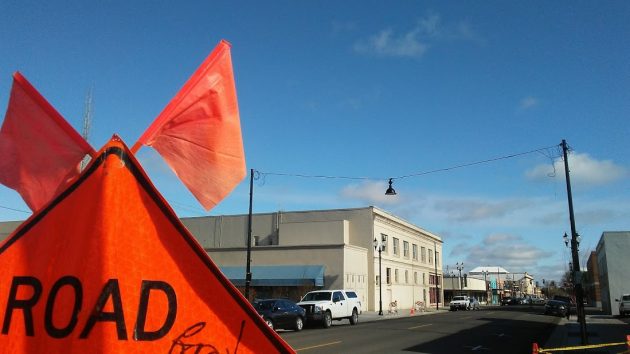 The first of the catenary hangs above Third Avenue Monday between Ferry and Broadalbin.

What’s that lamp doing up there? That’s what an acquaintance of mine wondered as he and I emerged from the downtown Carnegie Library on Monday.

For once, I happened to know the answer. As part of the $8.5 million downtown streetscape project financed by CARA, the downtown urban renewal district, the city of Albany is installing so-called catenary lights along seven blocks of Second and Third avenues. And this one, spotted by my acquaintance as he looked to the spring-like blue sky, is the first to go up on Third.

Lori Schumacher, the engineer in Albany Public Works who oversaw much of the detailed streetscape design, reminded me that the project calls for two of these lights per block along Second Avenue from Washington to Lyon, and on Third from Ferry to Lyon. There are to be 14 in all.

My acquaintance is a learned man, but “catenary” was new to him. It was new to me too when I first heard it a couple of years ago as the CARA board discussed design features of the street project. And as it turns out, the word is not quite right when applied to these overhead lights.

A catenary, I discovered when I looked it up, is the curve described by a chain or cable that hangs loose under its own weight from points at both ends. It looks like a parabola, but it’s not one, as men who studied it in the 17th century discovered. Leibnitz, Bernoulli and others derived its equation in 1691.

So are we getting catenaries downtown? Not really, since there are lamps hanging in the center of those cables strung from specially installed posts. With their weight the lamps necessarily distort the curve.

What is the point of those additional lights, placed to augment the considerable brightness of the new “double acorn” fixtures already illuminating the night? The lights were recommended by the design consultants, if I remember correctly, and at least some members of the council and CARA board thought they were unnecessary. But then the board approved them anyway. So here they come. (hh)


7 responses to “‘Catenary’ or not: More city lights”