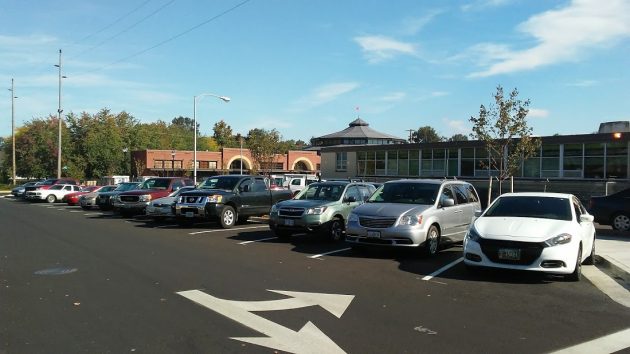 Most of the 19 parking spaces on this side of Calapooia Street between First and Second were occupied Tuesday morning.

The first parking issue connected with the Albany Carousel has come up before the city council. The council’s proposed solution: Reduce free on-street parking available to downtown workers, including employees of the Albany Post Office.

At its work session Monday, the council heard that carousel volunteers were having a hard time finding places to park when reporting to begin their shifts. (I wasn’t at the meeting but got a summary from Marilyn Smith, the public information officer in the city manager’s office.)

The upshot is a proposed resolution on the council’s agenda Wednesday. The measure designates on-street parking along the east side of Calapooia Street between First and Second avenues as “three-hour customer only” parking.

The resolution covers the 19 new back-in angled spaces on that side of the post office. Built last winter in the first phase of the city’s downtown “streetscape” reconstruction project, those spaces replaced eight parallel-parking spots. Like the former spaces, the new ones are usually filled by morning, presumably by vehicles of postal employees.

For many years the council has delegated enforcement of parking restrictions in the core area to the Albany Downtown Association, and the resolution says the change on Calapooia was requested by the association.

If the “customer-only” term is strictly enforced, it’s not clear how the change on Calapooia Street is going to do the carousel volunteers a whole lot of good when they are looking for a nearby place to park.

But here’s an idea: Rebuild the old footbridge across the Calapooia River and encourage the carousel people to park in Bryant Park and take the short walk up the hill to downtown. (hh)