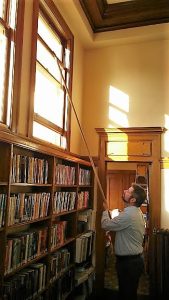 Librarian Jason Darling opens one of the repaired windows at the Carnegie Library.

There’s something noteworthy about the many windows in Albany’s downtown Carnegie library: Most of them didn’t work, but because of a project funded by private money, now they do.

The venerable Carnegie library has about 30 big windows on the main floor. To open or close them, you need a long rod. But most of them had been stuck for years, so the rod didn’t help. The Albany Library Foundation did something about that. They hired Vintage Window Restoration to fix things.

The windows are the kind that have counterweights hidden in the frame or casing. The weights are attached to the lower sashes via ropes that run on pulleys. When you raise the window, the weights keep it up.

Over time, this old-fashioned system tends to wear out. The ropes fray. The pulleys corrode. And the sashes get stuck to the jambs, sometimes because they were painted over.

Jim Hogan, head of the Library Foundation, told me the owner of Vintage Window, Chris Gustafson, and two employees worked for about two months this fall and took care of whatever was wrong. They also built and installed new window screens.

Vintage Window Restoration is based on Water Avenue and has done repair jobs on buildings from Astoria to Cottage Grove, as well as in Albany. (You can look up examples on the company’s website.)

The rod for opening and closing the library windows hooks on to a thimble-like metal fitting. On some of the windows, that fitting was missing. Councilman Dick Olsen, long a strong supporter of the downtown library, made new ones in the garage at his home. Librarian Jason Darling has an extra one on his desk. Come spring, Darling looks forward to being able to open the windows and let in fresh air.

Hogan told me the foundation spent more than $20,000 of its endowment on the window job and related work. That would be roughly the same amount  — in nominal dollars anyway — that construction of the Carnegie library cost in 1914. (hh) 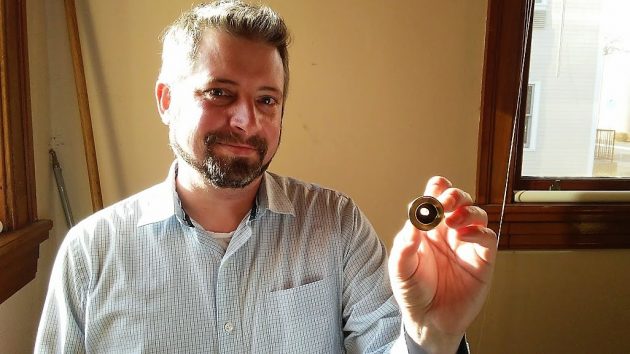 Darling holds one of the window gizmos made by Councilman Dick Olsen.