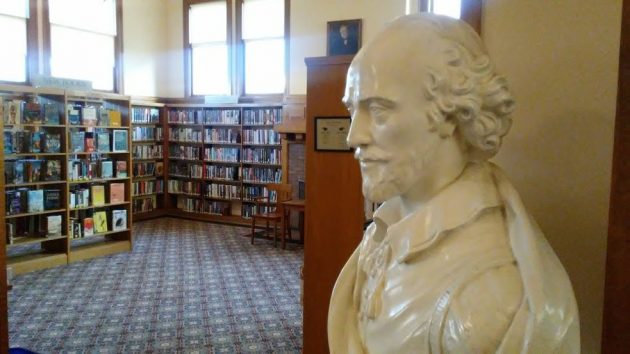 Inside the Carnegie Library. The Shakespeare statue is said to be older than the building, which opened in June 1914.

Closing the Carnegie Library downtown is still not off the table of potential steps the Albany City Council is considering to save money in the next few years. But no definite agreement on that or anything else emerged from yet another round of council budget discussions Wednesday night.

It looks like at an upcoming meeting, the council will consider asking voters in May 2020 to renew a special “local option” levy to augment fire and police department spending. There was some sentiment for raising the tax rate 20 cents over the current $1.15 per thousand dollars of taxable value.

Mayor Sharon Konopa continues to push for replacing the police and fire levy with a monthly utility fee that would be paid by everyone with a water or sewer account, not just owners of taxable property. Nobody has yet determined how hefty the fee would have to be to make up for the levy and possibly raise additional money for other city programs such as library, parks, and streets.

Konopa wants the council to adopt a utility fee on its own. Mike Sykes and other councilors say they would want an election instead.

The 2019-21 city budget of $346,824,157, including the $86.7 million general fund, is balanced. But the council has been warned that Albany may face a shortfall of $11 million in the next two-year budget period.  The current general fund, by the way, includes nearly $70 million for the police and fire departments.

As for the Carnegie Library, Councilman Rich Kellum says he was thinking of “repurposing” the building. Just how that would save money is not clear.

Closing the downtown branch would eliminate two jobs and some other expenses for a total savings of $215,00o a year. The layoff would cut the entire library staff by 12.5 percent. This would shorten hours at the main libary and cancel story times for children.

Some $300,000 in recently purchased materials would not be moved to the main library, according to material before the council. (No word on what would be done with it.) Also, the Albany Library Foundation has raised hundreds of thousands of dollars to support the Carnegie, and that effort would be be lost.

There was some talk Wednesday about forming a countywide library district. While that would shift library expenses away from the city, it would add another tax to Albany taxpayers without yielding any additional service. It’s hard to see voters being wild about that.

The council did appear to favor adding a fee of $25 or more to the fines for criminal convictions in municipal court. This would pay for appointing lawyers to defend indigents in city court, an expense that may rise to $80,000 a year.

The council’s next meeting is a work session at 4 p.m. Oct. 21. Some of this may come up again then, or it may not. It was hard to tell from the back and forth Wednesday which direction the council would take. (hh)

17 responses to “Carnegie Library still on the chopping block”