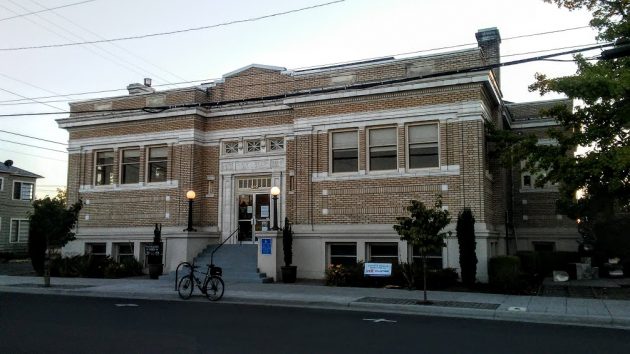 The downtown Carnegie Library on the evening of Sept. 5. Like the main library, it is closed until further notice.

When and if Albany’s public libraries reopen after the corona crisis, the downtown Carnegie branch stands a good chance of staying in operation despite the city’s budget problems, judging by what candidates in the Nov. 3 council election say.

I asked all nine candidates — seven for three council seats and two for mayor — whether the downtown branch should be closed in order to cut costs.

“No,” said seven of the nine, though in more words than that.

It should stay open, said Mayor Sharon Konopa, perhaps supported with a new utility fee she advocates for parks and libraries. She also wants to delay for two years any water and sewer pipe replacements, and fee increases normally going for that would then be available to support city programs..

“No, I cannot support closing the Carnegie Library,” said Councilman Alex Johnson II, challenging Konopa for the mayor’s post. The savings would have no significant impact on the budget, he added. “More importantly, closing it would eliminate a beloved historic asset from downtown which would change the ‘hometown feel’ for residents of the area.”

In Ward 1, council candidates Keith Kolkow and Sean Knowles are against closing it, citing its minimal cost (Kolkow says it’s $215,000 a year) versus its benefits to the public. The third candidate, Matilda Novak, says she’s “loath to see it closed,” but she’d like to examine how much it was used before Covid. “If it’s not being used when things are normal, that’s a consideration.”

In Ward 2, candidates Ray Kopczynski and Amanda Dant both oppose closing the branch, also citing the relatively small savings versus the effect on the public.

In Ward 3, candidate Marilyn Smith said, “No, the cost of operating is minimal. The history and mental health value of this venerable institution outweigh those savings.”  But she would look into whether the building could be shared with an “appropriate paying tenant.”

Her opponent in Ward 3, Jessica Brenneman, did not say yes or no. “There is talk of merging other businesses in it,” she wrote in part, “which I’m always up for discussion on everything.”

I made a mistake in not asking candidates to limit their answers to a certain number of words. Their complete replies would take all night to write up, and nearly as long to read. Which is why their answers here are mostly summarized.

Office holders can change their minds once they face actual issues rather than a questionnaire. But for now, it looks like the Carnegie Library is safe. Only one of next year’s council members, Bessie Johnson, has called for it to be closed. (hh)