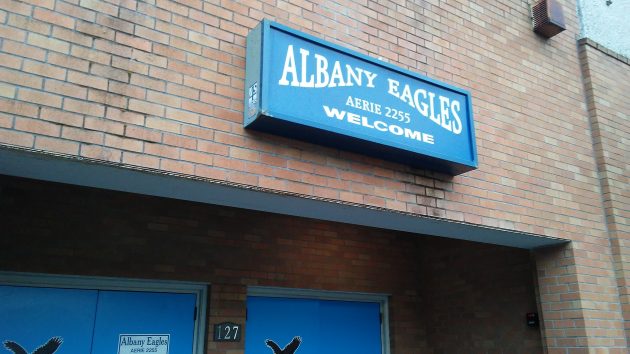 If the Albany Eagles lodge comes up for sale, the city’s urban renewal agency would be interested. That’s the gist of a discussion among members of the Central Albany Revitalization Area advisory board Wednesday night.

The board voted to authorize urban renewal manager Seth Sherry to explore with the Eagles whether the building is for sale, and if so, to see if it would be offered to CARA first. This essentially is the same decision the CARA board took in September 2017, when the topic last came up.

At the time, members of the lodge strongly protested that they had not decided to sell the property and any public discussion about it was out of order. On Wednesday, Mayor Sharon Konopa stressed that it wasn’t the city pushing the idea, but that CARA had been approached about it by a real estate listing agent.

The agent told me that an appraisal of the property had been ordered and was expected to be done by the first of the month. Any decision to put the lodge building on the market would probably be up to the Eagles’ national headquarters. The agent referred me to an Eagles’ board member for clarification, but my call to that person was not returned in time for this story.

The Eagles’ riverfront property at the southeast corner of Water Avenue and Broadalbin Street is shown on the city’s urban renewal plans as a key site. In 2011, a refinement of the plans suggested it be developed for parking. But on Wednesday there was talk among the CARA board about other uses that would be more helpful to the city’s economy. A riverfront hotel was mentioned, but at this point it is all speculation.

The Eagles’ building, a windowless box, was constructed in stages, in 1950 and 1968. The county last year listed its value as $952,520, but because it is used by a fraternal organization the site pays no property tax. (hh)