CARA wants to press on 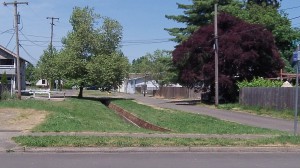 The Thurston Street ditch: Restoring the canal was among the CARA projects mentioned years ago.

Albany’s downtown urban renewal district, CARA, expects to have a surplus of $1.25 million next budget year. It could decide to levy that much less in tax, which would benefit mostly the city of Albany, Linn County and indirectly the state school fund. But after discussing it on May 7, the CARA advisory board recommended against this co-called “under-levying” idea. Instead, according to 7-2 vote at that meeting, the district would spend $485,000 of the surplus on paying off a loan from 2007, leaving about $765,000 to support possible new projects.

City Councilor Rich Kellum was the only one to support under-levying. His position is sound but has not carried the day. The board majority felt it was more important to resume, after a year-long pause, the job of stimulating business and job growth in the central area.

It’s hard to argue with the vision. Much is left to be done. The trouble is that about $685,000 of CARA’s tax take comes from special levies that voters approved for other purposes, from school bonds to city and county law enforcement. If the urban renewal law isn’t changed before the law enforcement levies come up for renewal — in 2014 for Linn County and in 2016 for the city — sidetracking a small but significant portion of the tax to urban renewal might make these crucial levies harder to pass. (hh)