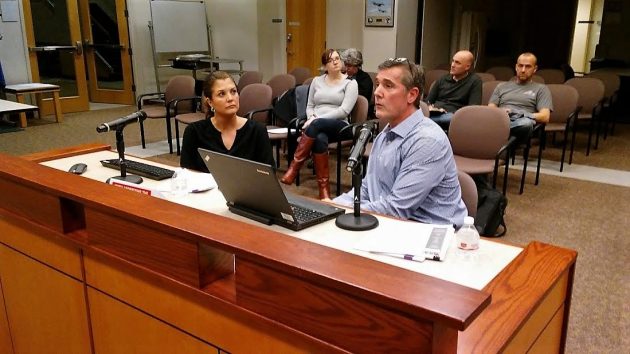 Robyn and Patrick Morley talk to the CARA board Wednesday night. Behind them, wearing boots, is architect Christina Larson, whose Albany firm, Varitone, would design the project.

A former industrial site overlooking the Willamette River east of Bowman Park is destined to become a housing complex. But it may be up to CARA, Albany’s urban renewal agency, whether it’s a standard apartment setup or a more ambitious design.

On Wednesday night the CARA advisory board heard from Robyn and Patrick Morley of Salem. The couple are the main principals — Robyn is president — of Willamette River View Holdings LLC. The venture bought the vacant 5.8-acre property on the river last spring for more than $1 million. Years ago the property was the site of a roofing-tile-making factory that was later demolished. The land is within the CARA district, having been added, after the district was formed in 2001, to encourage a previous development proposal that never got off the ground.

Though they had no specifics on Wednesday, the Morleys plan to ask for CARA help to build what they described as a multi-family development of mixed housing types totaling some 120 units. They say it would complement nearby amenities, namely Bowman Park, the Dave Clark riverside trail, and out-of-the-way Eads Park, and it would rejuvenate the entire Willamettte Neighborhood.

Their concept calls for five separate buildings including a four-story apartment block with elevators on the north side facing the river, some “garden-style” walk-up apartments, and a set of townhouses on the south side facing Linn Avenue, where their firm bought two houses to ease the transition from single- to multi-family housing.

The project would improve and put lighting on a path from Bowman Park downriver toward Simpson Park. What’s there now is an unimproved trail for walkers and bike riders. The city has an easement, but the trail doesn’t necessarily follow it.

Varitone Architecture of Albany would design the complex. The firm’s principal architect, Christina Larson, was in the audience Wednesday.

The Morleys said the kind of complex they have in mind would draw new residents and customers to Albany because it’s within easy commuting distance to Salem, Corvallis and Lebanon. But their concept would cost more than standard apartments, and more than they could justify as private parties in the business world. So they are looking for some kind of partnership with the city. How much? The figures have not yet been developed.

With no application before it, the CARA board took no action. But the consensus seemed to be that the board would welcome a fleshed-out proposal. When that might happen was not specified, though there was mention of starting the project in July. CARA watchers will have to wait and see. (hh) 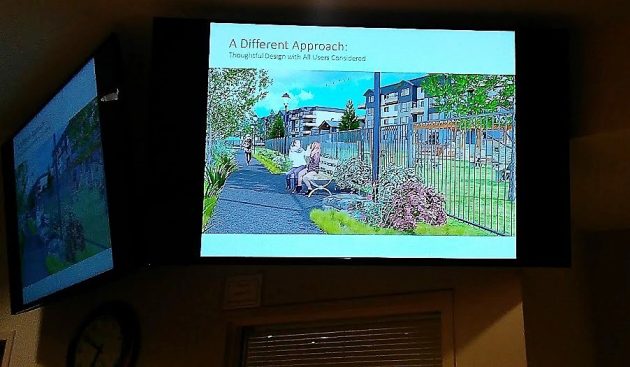 On overhead screens, a concept of the riverside path that the development would improve.