Revised: CARA and the Eagles 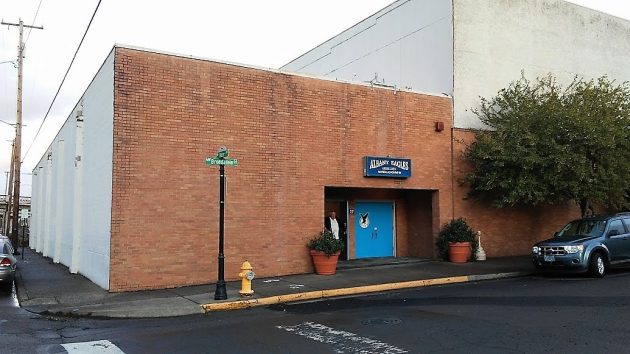 The lodge building of the Albany Eagles at Broadalbin Street and Water Avenue.

Albany’s urban renewal advisory board on Wednesday authorized its staff to talk to the Albany Eagles about possibly buying their lodge building, assuming the property comes up for sale.

The windowless box at Water Avenue and Broadalbin Street sits on a site which a plan prepared for the Central Albany Revitalization Area in 2011 designated as a key location to provide more downtown parking, first with a ground-level lot. As parking needs grow, the plan suggested, the site could hold a four-level structure with spaces for 346 cars.

Ed Hodney, the Albany parks and recreation director who’s also been supervising staff work for CARA, told the CARA advisory board the Eagles had decided to go ahead and put the building up for sale, but this appears to have been mistaken. The original version of this story reporting the assertion that the building was for sale prompted several denunciations on Facebook as fake news. Instead, according to one commenter writing on Facebook, lodge members had merely authorized a committee to explore “options for the Eagles’ future.”

Hodney said this afternoon he had checked back with his source, a real estate agent. “I think it is best for me to avoid more communication on the subject at this time. I have authorization from the CARA board to discuss our interest in the Eagles building with them, if they wish to do so. We’ll have to wait and see if they wish to do so. Totally in their hands at this point, as it should be.”

Linn County tax records show the structure was built in two stages, in 1950 and 1968. Though the property is nontaxable, the county lists its value at $952,520.

If the building is for sale and the city wants to buy it, any final decision would be up to the city council. On Wednesday, Councilman Rich Kellum voiced doubts. He didn’t want the city competing with any potential private buyers and didn’t think there was a need for a parking structure at this time. (hh)

This story has been edited to reflect that Eagles members dispute as untrue the idea that they had authorized putting their building up for sale.

9 responses to “Revised: CARA and the Eagles”