CARA sees the light and likes it 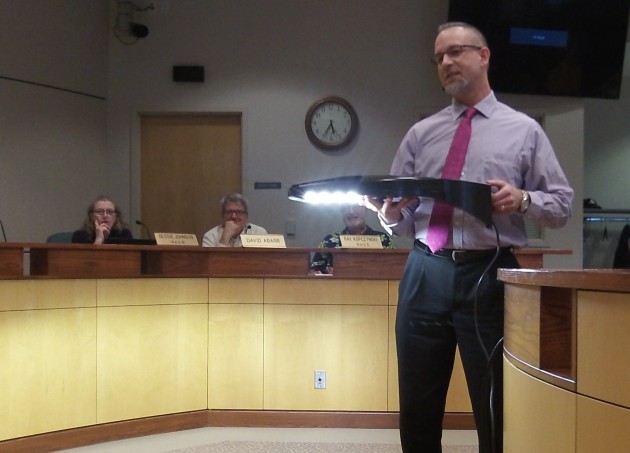 Phillip N. Ward, a Graybar sales rep, shows the CARA board how the proposed fixtures throw light down and not up.

Albany likely will use urban renewal money to light the Dave Clark Trail on the Willamette River along with a portion of Monteith Riverpark, where the path starts. But exactly how or when it will go about it is still unclear.

City councilors and other members of the Central Albany Revitalization Area advisory board on Wednesday unanimously endorsed the idea of spending CARA money to install the path lighting and replace some lights in the park. At their next meeting on April 15 they expect to get a detailed proposal from the city staff on how to get the job done.

The choices are whether to hire someone to design the lighting system and call for bids, or to go with a proposal to buy the fixtures from the Graybar company and have them installed by Benton Electric under the U.S. Communities Government Purchasing Alliance. Albany belongs to the alliance, which buys goods and services based on group bids.

Graybar and  Benton Electric put together a proposal for the path lighting that calls for 94 16-foot poles (set on 2-foot bases for a total height of 18 feet), 72 fixtures of one kind, 22 of another, plus four wall fixtures and one for a restroom. Total cost would be 9,245, reviews including $179,227 for installation.

The poles would be roughly 80 feet apart and support LED fixtures that look as though they came from a science fiction movie (something about Martians invading Earth). A brochure says: “The modern styling of the D-Series is striking yet unobtrusive, making a bold, progressive statement even as it blends seamlessly with its environment. The D-Series distills the benefits of the latest in LED technology into a high performance, high-efficacy, long-life luminaire.”

The light-emitting diodes are good for 100,000 hours, which means about 12 years of operation.

Sandy Roberts, community education specialist with the Albany Police, presented the proposal to the CARA board. She had earlier told the council about environmental design to discourage crime. When she was asked to work on the parth lighting, she enlisted the help of Graybar and Benton Electric because the city has no employees who are electrical engineers.

The lamps would be tall enough to be hard to vandalize, and they would throw light along the path but not off it or up, as the few existing lights now do. The point of the whole thing is to improve public safety and thus encourage more people to use the trail, all part of an effort to support existing business and encourage new investment in that area.

As board member Mark Spence put it, “Our job is to create an attractive riverfront.” (hh)


8 responses to “CARA sees the light and likes it”